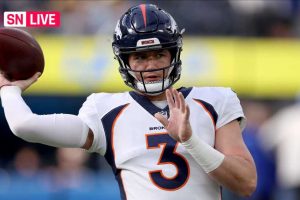 The Chiefs will battle the Broncos for the potential top seed in the AFC playoffs on Saturday.

A win in Denver will allow Kansas City to clinch no worse than the No. 2 playoff seeding in the AFC. A win against the Broncos — with a Titans loss to the Texans on Sunday — would give Kansas City the top spot. Although the Broncos are eliminated from postseason contention, quarterback Drew Lock will attempt to help Denver finish the season by breaking a three-game losing streak.

The Chiefs last played the Broncos at home in Week 8 to give Kansas City an 8-4 record in the 22-9 win. Despite having home-field advantage, Patrick Mahomes struggled against Denver, completing 15 of 29 passes for 184 yards and an interception. He went on to continue the Chiefs’ winning streak and completed 20 of 24 passes for 258 yards with two touchdowns against the Raiders the following week.

During Kansas City’s 34-31 loss to the Bengals last week, Mahomes avoided getting sacked and completed 26 passes for 259 yards with two touchdowns. However, he threw several incomplete passes in the second half that limited the Chiefs to field goals, which allowed Cincinnati to come back for the win at home.

Mahomes will be challenged against Denver’s pass defense. During their last meeting, the Broncos held Kansas City to only 15 first downs with 178 passing yards and 89 rushing yards. On the other hand, Lock will attempt to earn his first win as a starter this season. After Teddy Bridgewater was carted off the field with a head injury during the Broncos’ 15-10 loss to the Bengals in Week 15, he scored a touchdown during his first drive of the game. He most recently completed 18 of 25 passes for 245 yards with a touchdown during the 34-13 loss to the Chargers in Week 17.

Sporting News is tracking live scoring updates and highlights from Chiefs vs. Broncos on Saturday. Follow along for complete results from the NFL Week 18 game.

What channel is Chiefs vs. Broncos on today?

Chiefs vs. Broncos will be broadcast nationally on ESPN in Week 18. This game is going to have a different feel to it, with Chris Fowler, Kirk Herbstreit, and Laura Rutledge on the call. John Perry will be ESPN’s rules expert.

In Canada, viewers can watch Chiefs vs. Broncos with a subscription to DAZN, which includes every NFL game.

Chiefs vs. Broncos is scheduled to start at 4:30 p.m. ET on Saturday. This will be one of ESPN’s nationally televised games, as the network begins to broadcast more games heading into Wild Card Weekend.