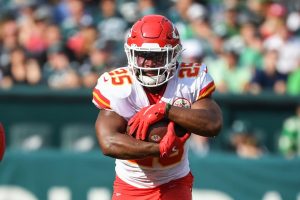 The Chiefs are getting one of their top weapons back this weekend ahead of a potential shootout.

Clyde Edwards-Helaire was activated off injured reserve Saturday, clearing his path to play Sunday versus the Cowboys. The second-year running back has been sidelined since spraining his MCL in Week 5.

The knee injury interrupted a strong start to the 2021 season for Edwards-Helaire, who rushed for at least 100 yards in consecutive games the previous two weeks and was averaging 4.7 yards per carry overall. Kansas City was averaging 128.2 rushing yards as a team with CEH in the lineup. That rate has fallen to 92.8 over the past five games.

The Chiefs are coming off perhaps their best offensive output of the season, however. They tallied 516 yards and 41 points while thrashing the Raiders, quieting discussion about whether the league had caught up to ﻿Patrick Mahomes﻿. The former MVP and coach Andy Reid will now have their best running back to lean on. Reid previously said he was considering holding Edwards-Helaire out until after Kansas City’s bye next week.

The timing of his return couldn’t be better for the Chiefs, who take on the league’s top scoring offense in the Cowboys.