Home » NFL » Chicago Bears fans deserve so much better than this

Chicago Bears fans deserve so much better than this 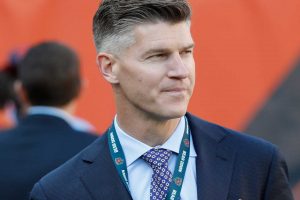 This is the Morning Win, by Andy Nesbitt.

Bears fans for the past few weeks had held out hope – no matter how unrealistic it likely was – that maybe, just maybe, their team could find a way to trade for Russell Wilson.

If that could somehow happen then the whole football world would open up for the Bears and the years of ugly QB play for the franchise would be a thing of the past.

Well, those hopes got crushed on Tuesday when it was reported that the team had agreed to terms with a QB on a 1-year, $10 million deal.

That QB, of course, was Andy Dalton, who is not Russell Wilson. Not even close. The move had lots of fans crushing the Bears, and rightly so because this move really doesn’t help the Bears at all. In fact, the move alone set their Super Bowl odds back just after it was reported.

This is nothing personal against Dalton. The veteran, who filled in for Dak Prescott last season in Dallas, has had a pretty decent career. He’s made three Pro Bowls and has made a lot of money. That is all good for him.

But the reason why Bears fans are so upset about this move is that once again the team picked a QB who isn’t going to lead them to a Super Bowl. That’s just not going to happen with Dalton under center or with Nick Foles under center. If one of those guys is the starter in 2021 then we know how things are going to go for the Bears – not well.

The team’s fans deserve a lot better than this. The franchise has seemingly always struggled to find a really good QB who can lead the team. I guess Jay Cutler was the last one that instilled some confidence, but even he only had two winning seasons in Chicago and threw a ton of interceptions during his eight years with the Bears. The QB situation before him was a mess, too.

To say Bears GM Ryan Pace has struggled with finding a QB since taking the job in 2015 would be a gigantic understatement. He was the guy, after all, who traded up a spot in 2017 to pick Mitch Trubisky with the No. 2 overall pick in the draft. He traded up a spot to do that! Like other teams were beating down the doors to get Trubisky (they weren’t).

We all know how that has worked out for the Bears.

We also know that Patrick Mahomes and Deshaun Watson were picked later in the same first round.

None of this is really about Andy Dalton. All of this is about Ryan Pace and how bad he is at finding a QB. I mean, he stinks at it. This list of QBs that he’s brought into Chicago proves that.

The Bears are one of the classic franchises in the NFL. Their fans have been some of the best in the league during all those years, too. And it seems like more often than not they are rooting for a team that they know doesn’t have a real shot at anything serious because who is under center.

It has to be pretty painful to be a Bears fan because of that and because of the news they got on Tuesday. Just another gut punch in a long list of gut punches.

– The Houston Texans agreed to terms on a 1-year, $12 million deal with QB Tyrod Taylor, which led many people to think that Deshaun Watson would soon be traded.

– Charles Curtis ranked all 68 teams in the men’s NCAA tournament by mascot, which is awesome.

– LeBron James is now a part-owner of the Boston Red Sox. But isn’t he a Yankees fan?

– Andrew Joseph used a tested formula to figure out which team will win the men’s NCAA tournament.