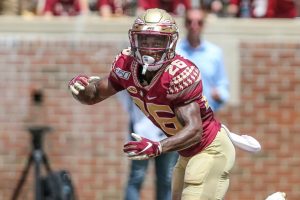 The Chargers traded ﻿Desmond King﻿ during the 2020 season and bid adieu to ﻿Casey Hayward﻿ in the offseason. They turned to the draft to find a replacement with a big name.

The son of former NFL star cornerback and two-time Super Bowl champion Asante Samuel, the younger Samuel excels at ruining opposing quarterbacks’ hopes of completions, forcing 30 incompletions in coverage in his career, tying for the second most among corners in FBS since 2018, per Pro Football Focus. Samuel also boasted the third-highest production score among the 44 cornerbacks invited to the NFL Scouting Combine this year, according to Next Gen Stats.

Samuel becomes an immediately notable name in a new-look secondary that returns two significant veterans in Michael Davis and Chris Harris Jr., but has only one of the two (Davis) under contract beyond 2021. Samuel can compete for a starting outside job (while also gaining valuable wisdom from the likes of Harris and Davis) as a draft pick that helps the Chargers improve instantly and also plan for the future.

Los Angeles certainly needs it. Chargers corners allowed the fourth-highest yards per reception in the NFL in 2020, per PFF, the main weakness in a pass defense that finished ninth in yards allowed per game.

After shoring up the tackle situation in the first round, the Chargers have turned their attention to their biggest defensive weakness. They’re 2 for 2 at the plate.