Cardinals S Budda Baker to wear No. 3 in tribute to Allen Iverson 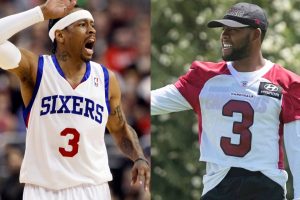 Budda Baker has shuffled through jersey numbers since stepping foot into the NFL.

Entering his fifth season, the Cardinals safety may have finally found the answer.

Baker, who has worn the Nos. 36 and 32 during his career, will don the No. 3 moving forward. His inspiration? One of the greatest “No. 3s” in sports history.

“I loved watching Allen Iverson,” Baker said regarding the change, per the team. “The way he changed the game with his swag, the way he played, the effort he played with, that’s how I play on the football field, so it came natural.”

Similar to the NBA Hall of Famer he grew up a fan of, Baker entered his sport having to overcome a perceived size disadvantage. At 5-foot-10, some questioned if Baker could hold his own at the professional level. His two first-team All-Pro nods and three Pro Bowl selections indicate he’s doing just fine.

After wearing the No. 32 in high school and for the University of Washington, Baker was assigned the No. 36 his rookie season due to his former number being in the possession of fellow standout safety Tyrann Mathieu﻿.

Mathieu’s departure from Arizona in 2018 cleared a path for Baker to reclaim the No. 32, which he wore in 2019 and 2020. But, now that players are allowed to wear single-digit numbers, Baker decided again this offseason to make a change.

“Third time’s the charm,” he told NFL Network’s Colleen Wolfe during last month’s Schedule Release ’21 special. “I had got 36, Tyrann was 32 at the time. Then, I got the 32. Now, I’m number 3, baby. I had to go single digits, have my own identity, have my own legacy.”

Iverson, a one-time MVP and 11-time All-Star, definitely made an indelible impact during his 17-year NBA career. If he continues on his current path, Baker will be well on his way to doing the same.