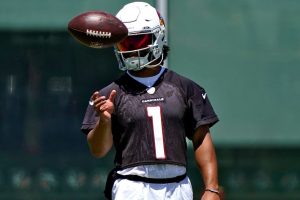 Murray’s symptoms were “minor,” said Kingsbury, who had just texted with Murray but hadn’t talked to him since his positive test. Murray felt “really poor” with cold-like symptoms before taking a test. Murray can return to the field sooner than five days if he tests negative, Kingsbury said.

Murray missed Saturday’s practice because of a sore wrist and could miss five of six practices this week, or more, if he doesn’t return before then. Kingsbury said Murray is the only player to test positive this training camp but that a couple of players tested positive in the spring.