Cardinals’ Green: ‘Lot left in the tank’ at age 32 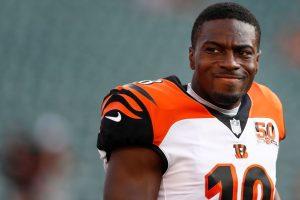 TEMPE, Ariz. — New Arizona Cardinals wide receiver A.J. Green feels like he still has “a lot left in the tank” and doesn’t think he has anything prove by signing with a different team for the first time in his career.

“I still feel young,” the 32-year-old Green said Thursday during his introductory Zoom press conference. “Legs feel young. … I think I have lot of years left playing at a high level.”

Green signed a one-year contract with the Cardinals hopes those legs can help carry Arizona to at least its first playoff berth since 2015. Sources told ESPN’s Adam Schefter that the deal is worth up to $8.5 million and includes $6 million guaranteed.

“I think that’s the main goal, with winning a championship,” Green said. “For me, I’ve been in Cincinnati 10 years. So, for me, to go somewhere to where the organization is ready to win now, it’s unbelievable.”

He said Arizona was among a handful teams that were “very” interested in him, but Green’s attraction to the Cardinals was how he saw his fit in their offensive scheme.

“I was looking for an offense that really can fit my skill set and I felt like — with Kyler [Murray] and Hop [DeAndre Hopkins] and [Christian] Kirk, and the guys that they have around this offense — I felt like this was gonna be the best fit for me,” Green said.

Their stability at quarterback also helped the Cardinals’ cause.

Green said last season was “difficult” because of the Bengals’ three-man quarterback carousel, especially since he was coming off an ankle injury that caused him to miss all of 2019. But he said that he also feels that last season helped him become mentally stronger.

“I’ve been in Cincinnati for 10 years, so that’s all I know,” Green said. “So coming to Arizona is refreshing. I think you look around the league with Tom Brady, all these other guys [that] have been in these same places for years, and you saw what Tom Brady did last year. I think it’s good.”