Cardinals backup QB Colt McCoy spurs win over Seahawks: 'To be honest, it's my responsibility' 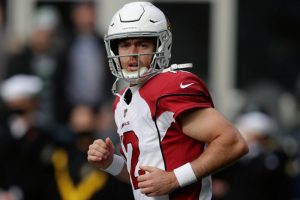 ﻿Colt McCoy﻿ led the Arizona Cardinals to a double-digit road win over a division rival on Sunday. So how did the veteran QB respond after the 23-13 triumph in Seattle that pushed the Cards to 9-2 and left the Seahawks sputtering in the NFC West cellar? With a shrug.

“To be honest, it’s my responsibility,” he said, via the team’s official website. “When your number is called, that’s my role.”

McCoy made his third straight start as the Cards rested ﻿Kyler Murray﻿ (ankle) for another week ahead of their bye. The QB shined in his first outing, struggled in the second, and was on fire once again Sunday.

“Good teams bounce back from (bad losses),” McCoy said. “I didn’t know if I’d be part of that this week.

McCoy thrashed Seattle’s defense, going 35-of-44 passing for 328 yards and two TDs with zero turnovers for a 112.9 passer rating. It marked the journeyman’s highest passer rating and most passing yards with at least 15 pass attempts in a start since Week 13, 2014 (with Washington vs. Indianapolis). Playing without ﻿DeAndre Hopkins﻿ once again, the veteran QB spread the ball around and utilized tight end ﻿Zach Ertz﻿ (8/88/2) in the red zone.

“These past three weeks have been fun,” Ertz said. “Everyone knew what a great mentor (McCoy)’s been for Kyler, but he’s a great football player, and people should never take that for granted.”

The 35-year-old McCoy has ensured in recent weeks that he’ll hang around NFL rosters for several more seasons. Teams always want veteran signal-callers who can help teach younger QBs and, if necessary, move the offense and help the team win games. McCoy has performed his job with aplomb.

McCoy’s two victories in three weeks are his most wins in a season as a starter since 2011.

“To not have those guys (Murray and Hopkins) in November at all play and (still) have the best record in football and be undefeated in the division, it says a lot about those coaches and players in that locker room, continuing to fight,” coach Kliff Kingsbury said. “We’ve just got to keep getting better.”

The Cards getting an extra week of rest for Murray while not losing ground in the race for the No. 1 seed could be massive for the stretch run for the top team in the NFL.