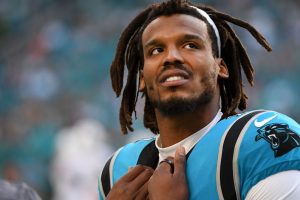 CHARLOTTE, N.C. — Cam Newton doesn’t know whether his future will be with the Carolina Panthers or another team as he approaches free agency, but he still believes he can play quarterback at a high level.

“I am healthy,” Newton said Monday after he completed his second go-round at Carolina. “I know the expectations I have for myself. But selfishly, the question can kind of be directed at, ‘Do you think I can still play?’ Yes. I still do think I can play. At a high level.”

Newton, 32, didn’t rule out being a backup wherever he plays in 2022. The 2015 NFL MVP says it’s all about being with a team that can win. League sources told ESPN it’s not 100% that Newton won’t return to Carolina, which finished 5-12 this season.

Sam Darnold is the only quarterback under contract for the Panthers next season, and Carolina is expected to be active in the quarterback market, whether it’s in free agency, trade or the draft.

Darnold was 4-7 as the starter, losing eight of his last nine starts.

The Panthers lost their final seven games and 13 of their last 15 after a 3-0 start. Newton returned to the team that made him the top pick of the 2011 draft in early November after Darnold was placed on injured reserve with a shoulder injury.

Newton went 0-5 as the starter before Darnold returned to start the final two games and finished the season 684 passing yards with four touchdowns and five interceptions while completing 54.8% of his pass attempts. He also rushed for 47 yards and five touchdowns.

Newton admitted it was tough being on the sideline when completely healthy.

“Wooo!” Newton said. “I wasn’t used to that. I made a joke to DJ [Moore] during the game. I’m like, ‘Bro, my body doesn’t feel right. My toes are going to sleep.’ But at this particular point in time, I’m a team player.”

Coach Matt Rhule received some criticism for allowing Darnold to run a fourth-and-inches play at the Tampa Bay 1 in the second quarter of Sunday’s loss to the Tampa Bay Buccaneers. Darnold came up short on a quarterback sneak that has been considered Newton’s “bread-and-butter” play.

Newton said it was “irrelevant” at this point on what he thought about that decision. But, he added, “I know my skill set is way better than just a fourth-and-inches type of person.”

While Newton wasn’t able to produce wins for the Panthers, he said it “absolutely” was the right decision to return to the team that released him during the offseason prior to the 2020 season.

He’s had nothing but good things to say about Rhule, who made the decision to move on from Newton before his first season at Carolina, since returning.

“Everything in life, as you meditate and find out about yourself, you don’t know what it is, why you’re going through it,” Newton said. “The whole synopsis of everything, I don’t necessarily know. But it was needed for me to come back. I think I got closure for a lot of different things. It was very meaningful for my life and my career. I learned so much about myself, this team, this city. It was very purposeful.”

Newton called his return very “therapeutic,” but he still doesn’t know what’s next.

“I think I’ve proved to the people I need to prove to my worth, my value,” he said. “Me answering this now, just a day removed from the season, I don’t know what that looks like.

“But can I tell you do I have a lot of football [left], do I want to play? Yeah. But under the right conditions.”