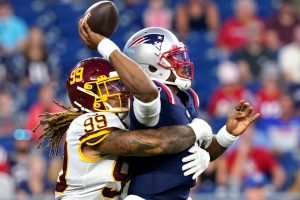 ﻿Chase Young﻿ played just 11 snaps in Thursday night’s preseason game against the New England Patriots. In that brief time, the reigning Defensive Rookie of the Year made his presence felt. Forcefully.

Newton was asked after the game what he made of his encounter with Young in the Patriots’ 22-13 win.

“He’s smaller than I thought,” Newton quipped, per the team’s official transcript. “I’m just messing with you. That’s a joke. That’s a joke. I’m just messing with you. But yeah, he’s going to be good, man. He’s going to be good. He’s going to be real good. But I’ve got to do a better job of protecting the football. He kind of got me like right in the tweener when I was letting the ball going or trying to pull it back. Coach talks about it all the time, man, ball security is job security, and that’s what it comes down to.”

The edge rusher showed Thursday that even in minimal snaps, he can give defenses a headache. Imagine if Newton or Mac Jones had to deal with him all night? Young provided Wynn with what’s sure to be an ugly film session Friday.

Young’s hit on Newton might have crumpled smaller signal-callers.

“He’s very big, very big” Young said. “When I hit him, I felt that he was a big dude. I’ll say that. But you know, we’re like the same size, so it wouldn’t have been like me to [not] take Cam down, so gotta take him down.”

Already an athletic freak able to win with speed or power — or both — as a rookie, Young said he’s worked to improve his hands this offseason, so blockers can’t get into his body. He displayed that before crushing Newton.

“I tell people that I want to work on my hands more this year,” Young said. “On that play, all that work paid off. It was a long-arm cut, and I turned my hips, got around the edge, and tried to make a play. I’m glad I could definitely impact the game early.”

Young will be impacting the game both early and often this season.