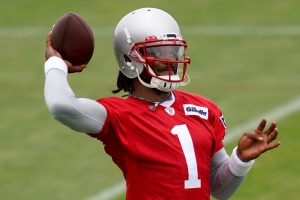 Cam Newton appeared to hit his right hand on a helmet during OTAs on Friday, NFL Network’s Mike Giardi reported, exiting the session to spend considerable time with trainer Jim Whelan and one of the team doctors. Offensive coordinator Josh McDaniels checked in on Newton, per Giardi, before returning to work with the other three Patriots quarterbacks.

Newton later took a knee and watched his teammates participate in drills.

We’ve learned in recent years how an unfortunate collision between throwing hand and headgear can cause issues for quarterbacks. Last season, it happened to Jared Goff late in the season, forcing the Rams to turn to backup John Wolford before Goff was able to return in the postseason.

Luckily, it’s only June, which means any injury of significance could keep him out of next week’s minicamp, but he’d have time to recover before training camp.

As for the other big name under center, Mac Jones﻿, he might not be at 100 percent, either. Jones was uneven in his play Friday and was wearing a sleeve on his right calf, which appeared to bother him on a couple of occasions, Giardi reported.

A day after McDaniels fielded questions regarding both signal-callers and spoke about the importance of using this time to lay a foundation, we’ve received less-than-encouraging reports on the two. Again, though, it’s only June. We’ll monitor their status before starting to become concerned.