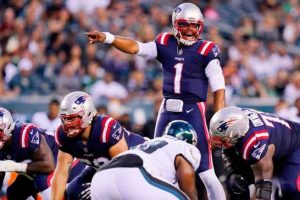 Capping off what coach Bill Belichick described as a “good week,” Cam Newton seemed to strengthen his grip on the New England Patriots’ starting quarterback spot in a 35-0 win over the host Philadelphia Eagles on Thursday night at Lincoln Financial Field.

Newton started and finished 8-of-9 for 103 yards, with one touchdown and no interceptions, playing three series before rookie Mac Jones took over.

Jones, the first-round pick from the University of Alabama, was also productive in going 13-of-19 for 146 yards over four series, with no touchdowns and no interceptions.

“Cam, Mac, all of us, I think we’re all getting better day by day,” said receiver Jakobi Meyers, who caught a 28-yard scoring pass from Newton in the first quarter. “Last year [Cam] got the short end of the stick, just having to be thrown into the situation with no preseason and everything. Not trying to make excuses for him or anything but, I think this year is definitely a leap forward, and I think we’re all growing as an offense.”

Belichick has said multiple times that Newton is the starter, but added that whatever time Jones might be ready to challenge and compete, he would evaluate that when it happens.

Jones is challenging and competing, as his initial drive early in the second quarter Thursday night covered 17 plays, 91 yards and chewed up 9:04 on the clock before culminating in a 1-yard touchdown run by rookie running back Rhamondre Stevenson. It was a tough spot for him to enter the game early in the second quarter, pinned deep in his territory, and a 19-yard connection to receiver N’Keal Harry on third-and-13 got the march started.

“I’ve been around Mac long enough know to know that’s not really a surprise,” said Meyers, who totaled three catches for 56 yards. “That was the expectation when they drafted him.”

The Eagles didn’t play most of their defensive starters, while the Patriots had most of their first-stringers playing through the first quarter — and had a level of familiarity with the opponent from practicing against them for two days earlier in the week.

Asked about Newton’s second year with the Patriots, and if he’s still learning about him, Belichick cautioned from making any declarative statements because “the season’s pretty early here.” But he did acknowledge, “I think we’re making progress.”

Newton, who handed two footballs to fans in the stands after touchdowns and relayed that he hopes there’s many more deliveries over the course of the season, said outside of a late fumble by Stevenson “it was pretty much a flawless night offensively.”

The Patriots will practice with the New York Giants on Wednesday and Thursday of next week in Foxborough, Massachusetts, before traveling to East Rutherford, New Jersey, to play them in their preseason finale Aug. 29.