Byron Jones 'didn't mind' Xavien Howard's issue with deal: 'I understand what he's trying to do' 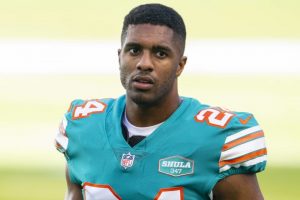 ﻿Xavien Howard﻿’s contract dispute involves his teammate as a symbol of financial significance, which could make for some awkward moments.

Such has not been the case so far for Howard and Byron Jones, according to the latter cornerback, who told reporters Howard’s issues with their difference in pay has not soured their relationship.

“I didn’t mind because truthfully, man, the guy is one of the best,” Jones said of Howard, via the Miami Herald. “The guy had 10 interceptions last year. There is no secret to his impact on the defense and his impact on the team. When a guy has a season like that, he’s the freaking best. I understand what he’s trying to do. That’s my boy. We played a lot of hard snaps last year together. We’ve bonded close together, so I understand the business.”

Howard’s situation has festered for some time now, but it wasn’t until Tuesday’s report date that the cornerback made a public statement on the matter. It was a forceful one in which Howard painted himself as “one of the best cornerbacks in the NFL,” and included a key detail after listing his accolades: “Yet, I’m the second-highest paid cornerback on my own team, and it’s not even close.”

Howard’s point-blank revelation that Jones’ rate of pay is a key factor in his current stance might also put Jones in a strange spot. It’s not all that often that a player publicly positions his teammate’s income as central to his own dispute, even if it is highly relevant information.

“I understand what he’s trying to do,” Jones insisted. “Obviously we’d love to have him here, but there are no hard feelings. I’m not scared of facts. The dude is the best. There is no question about that. Last year we gave him all of the hard covers and he showed up.

“Not only did he show up, but he also excelled at those, too. He didn’t get cupcake interceptions. He went and got those — with one hand, high-pointing the ball. He made his money. He earned it definitely.”

Jones joined Howard’s Dolphins a year ago, signing a lavish deal that makes him the fifth-highest paid defensive back in the NFL (based on annual average value), and few folks could have found a reason to be upset. Miami had two promising corners who were both entering their prime and playing the initial years of their second professional contracts.

Then, Howard had a career year, leading the league with 10 interceptions and taking a moment to scan the compensation rankings among his teammates. When he found he wasn’t even making the most money at his position on his team, he took issue.

Howard reported for camp but has been out of action with an undisclosed injury. In the meantime, he’s remained a hot topic in Miami and across the league, leading to plenty of questions for Jones and a chance for resentment to build.

Jones hasn’t given such feelings a thought. He’s been busy traveling the on-ramp to the high road.

“It’s healthy, baby,” he said of his relationship with Howard. “Of course. We’re both trying to get better each and every day. We’re in the meeting rooms talking together. We do individual meetings with the coach, so it’s perfectly fine.”

Until it’s solved, these questions will continue. But those worried about Howard’s contract dispute potentially causing internal strife should be relieved after hearing from Jones.