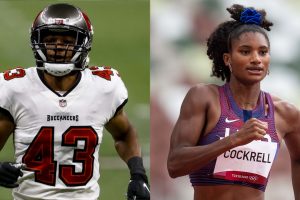 The Tampa Bay Buccaneers got together ahead of Monday’s training camp practice for a little film session. This one was different than normal for the defending Super Bowl champs.

Bucs players gathered to watch Anna Cockrell, sister of Tampa corner ﻿Ross Cockrell﻿, run in the semifinals of the women’s 400-meter hurdles in the Tokyo Olympics.

Y'ALL GOT ME CRYING IN THE VILLAGE DINING HALL 😭😭🥰 https://t.co/e5WfaW9D9u

Finishing second in her rain-soaked semifinal, Cockrell heads to the final with the fifth-fastest time, clocking in at 54.17 seconds.

“It was awesome, man,” coach Bruce Arians told reporters Monday morning, per the Tampa Bay Times, “us holding our breath and it was such a close race and she finished so strong and got in there. I mean, the whole room exploded,.”

The final takes place Tuesday night at 10:30 p.m. ET. You can be sure Cockrell and his Bucs teammates will be tuning in for the much-anticipated medal round. Fellow Americans Sydney McLaughlin and Dalilah Muhammad, who owned the two fastest times in the semis, will also compete in the final.

In the same heat Anna Cockrell qualified for the 400M hurdle final, Melissa Gonzalez, wife of Detroit Lions quarterback David Blough﻿, missed the cut, coming in with a time of 57.47 seconds.