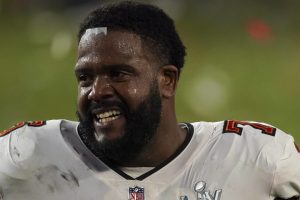 The Tampa Bay Buccaneers continue to lock down their immediate future.

Bucs offensive tackle ﻿Donovan Smith﻿ reached an agreement on a two-year, $31.8 million contract extension through 2023 that now includes $30 million guaranteed over the next two seasons, NFL Network Insider Ian Rapoport reported, per a source informed of the deal.

Smith was set to earn $14.25 million on the final year of his contract.

The extension creates $10.6 million in cap space in 2021. The Bucs immediately put that space to good use, re-signing defensive tackle ﻿Ndamukong Suh﻿ on a one-year deal worth $9 million fully guaranteed, plus incentives, per NFL Network’s Tom Pelissero.

The new contract for Smith won’t break the bank, but the $30 million guaranteed in the next two years gives the left tackle security. For comparison, ﻿Trent Williams﻿, the new highest-paid tackle, signed a six-year deal with $45.1 million in guarantees.

Extending Smith’s contract continues an active offseason for Tampa Bay GM Jason Licht, who has managed to keep the Super Bowl champs’ core together for another run the next year or two.

Retaining ﻿Tom Brady﻿’s blindside blocker beyond the 2021 season was a priority for the Bucs. A stabilizing force on the left side, Smith has improved each year in Tampa and, not surprisingly, had his best season with Brady. With Smith turning just 28 years old before this season, the Bucs believe the former second-round pick still has room to grow.