Home » NFL » Bruce Arians: Tom Brady may be set for a different than usual role at Buccaneers’ minicamp

Bruce Arians: Tom Brady may be set for a different than usual role at Buccaneers’ minicamp 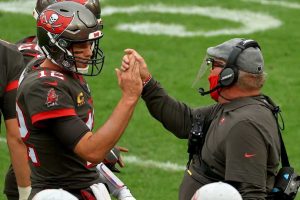 Mandatory minicamp is rapidly approaching for the Buccaneers and with it will come a key decision for Bruce Arians: How much work is he willing to let Tom Brady do?

The 43-year-old veteran is recovering from offseason knee surgery. While Brady, an ultimate competitor, will surely want to get in some reps with his teammates at minicamp, Arians may not let him do a lot.

“I don’t know how much I’ll let him do … with guys chasing him around,” Arians said, per ESPN’s Jenna Laine. “We’ll see. We’ll see what the doctors say. He may be doing a lot of coaching.”

That may frustrate Brady, but operating in a coaching role could be a good thing for him. The veteran quarterback already has 21 years of NFL experience and there is no need for him to rush back from knee surgery early in the offseason.

Brady’s Bucs were sharp last year, and Brady has plenty of time to get reps in on the field. The longer he waits to do so, the healthier his knee will be. That’s why Arians will exercise caution with him in minicamp.

Though Arians may limit Brady, the Bucs passer has been doing workouts of his own in recent weeks. Some of his teammates have tagged along, and last week they worked out at the Bucs facility.

Some of the offensive players who opted to work with Brady include Tyler Johnson and Ke’Shawn Vaughn, but both should return to Tampa Bay camp in the coming days.

If Brady is limited during minicamp, that will open the door for veterans Blaine Gabbert and Ryan Griffin to get more reps along with rookie second-round pick Kyle Trask. That will be a good opportunity for Tampa Bay to assess what their quarterback room might look like when Brady eventually retires.

And having all three of these players learn from Brady on the sideline would surely benefit them and help upgrade the backup QB spot.