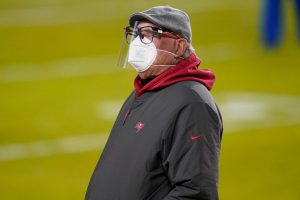 In the Week 12 matchup versus the Kansas City Chiefs, the Tampa Bay Buccaneers essentially lost the game in the first 15 minutes.

Bruce Arians’ squad got divebombed by Patrick Mahomes and Tyreek Hill﻿, trailing 17-0 before the end of the first quarter. Hill generated 203 yards on seven receptions with two TDs — a 75-yarder and a 44-yarder — in the opening quarter. Leaving ﻿Carlton Davis﻿ on an island early proved faulty.

The Bucs flipped the game plan and tightened the tilt with two fourth-quarter TDs, to close the score to 27-24. But Mahomes generated three first downs to ice the clock. The early barrage proved enough to secure the win.

Ahead of the Super Bowl LV rematch, Arians knows the Bucs will need to be better than how they started Week 12.

“You go back, and you look at the game and what matchups you had,” Arians said. “This one, again, familiarity helps. I’m not really excited to play Tyreek Hill﻿, Kelce and Mahomes. That’s a formidable challenge, but our guys will be up for it.”

Slowing Kelce is a task every defense enters the game against Kansas City as a top priority. Few pull it off.

“It’s really hard,” Arians said. “He reminds me a lot of Tony Gonzalez back when he was unbelievable just trying to stop him. He’s got wide receiver skills and he runs like a wide receiver. He runs routes like a wideout [and] he beats corners. It’s a hard, hard challenge, but Todd [Bowles] will come up with some schemes. Again, we’ve got to get after the quarterback and we can’t let him (Patrick Mahomes﻿) run around and make those plays that he and Kelce do so well.”

The Bucs defensive front will play a key role in helping out the back end in Super Bowl LV. The Chiefs are in line to play without both of their starting offensive tackles — Eric Fisher and Mitchell Schwartz﻿. If Shaquil Barrett and Jason Pierre-Paul can take advantage and squish Mahomes in the pocket, it will go a long way in helping protect a young secondary from getting torched again by the Chiefs offense.