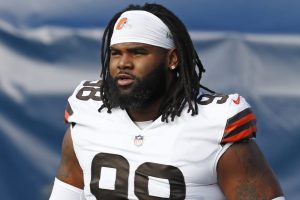 Few roster moves are made without a corresponding action. Browns fans learned that lesson Friday.

Richardson arrived in Cleveland in 2019 as part of former general manager John Dorsey’s spending spree and instantly filled a need for the Browns on the interior. The former first-round pick of the Jets chose Cleveland to establish a home after becoming somewhat of a football nomad in recent years, and he certainly followed through when it came to availability and productivity. Richardson appeared in all 32 regular-season games in two seasons with the Browns, recording 78 tackles (nine for loss), 7.5 sacks, seven passes defensed and four forced fumbles.

A boisterous personality in the locker room who backs it up on the field, the 30-year-old Richardson was reliably effective and earned his compensation, but as is often the case in the offseason, that premium became a bit too rich for the Browns after signing Clowney. Cutting Richardson saves the Browns $11 million in cap space, per Over The Cap, helping create some breathing room for the Browns after they signed Clowney to a one-year deal that can pay him up to $10 million but includes four void years to spread his cap number between 2021 and 2022. Because of those void years, Clowney’s cap number for 2021 is just $3.87 million, less than a third of Richardson’s cap number of $12.6 million.

With this considered, releasing Richardson wasn’t entirely necessary. Cleveland still could have carried his contract and remained under the cap at a fairly comfortable margin.

But there is an advantage to be had with existing cap space when looking ahead. The Browns are approaching future offseasons in which they’ll need to find cap space to re-sign ﻿Baker Mayfield﻿, ﻿Nick Chubb﻿ and ﻿Denzel Ward﻿. Carrying a healthy amount of cap space to the end of 2021 will produce a useful rollover number into 2022, when the cap is expected to jump significantly at just the right time for the Browns to spend in order to keep their own.

There’s also the valuable playing time to be gained by 2020 third-rounder ﻿Jordan Elliott﻿, who flashed in the few opportunities he had while entrenched behind Richardson and ﻿Larry Ogunjobi﻿ (who left for Cincinnati in March). With the release of Richardson, Cleveland will roll out a new defensive interior featuring free-agent addition ﻿Malik Jackson﻿ and Elliott, and stands to add more talent at the position in the draft.