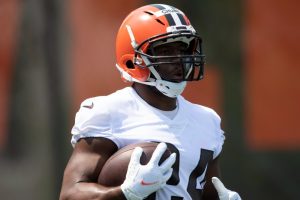 Over the past two seasons, Cleveland Browns running back Nick Chubb has emerged as one of the NFL’s top running backs.

Now he’s emerged as one of the league’s top-paid running backs.

Chubb and the Browns have an agreement in principal on a three-year extension for $36.6 million, NFL Network Insider Ian Rapoport reported Saturday. The deal comes with $20 million fully guaranteed, Rapoport added.

At an average of $12.2 million per season in those three years, Chubb would be the sixth-highest-paid running back on yearly averages, per Over the Cap.

The 25-year-old Chubb, who could have another extension in store when he’s 28, is entering his fourth NFL season after back-to-back campaigns in which he rushed for more than 1,000 yards and earned Pro Bowl bids.

Heading into a 2021 campaign in which many believe success to be at hand for the Browns, Chubb and Kareem Hunt provide Cleveland with one of the top one-two combos around.

Interestingly enough, though, an impending extension for Chubb isn’t the one in the Browns backfield that’s garnered the most anticipation, as quarterback Baker Mayfield heads into the fourth season of his five-year rookie deal.

Mayfield was the top overall selection of the 2018 NFL Draft, while Chubb, whose 5.2 yards per carry since 2018 trail only Lamar Jackson, was selected 35th overall in the second round of the same draft.

Chubb rumbled to 1,494 yards in 2019, trailing Derrick Henry by 46 yards for the rushing title. Last season, Chubb was seventh in the NFL with 1,067 yards. A rugged runner able to run through defenders and gain the tough yards, Chubb has also shown off his ability to break off a big gain.

Now, he’s broke loose for the biggest paycheck of his still-burgeoning career.