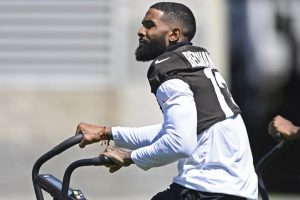 ﻿Odell Beckham﻿ long ago proved how good he can be. What has been a lingering question for the past two years is how much he’ll help the Browns.

While the experiment was put on hold midway through last season amid Beckham tearing his ACL, the conversation regarding his value never stopped. If anything, it only intensified with Cleveland making a late-season charge and ending its long playoff drought.

With OBJ appearing close to a full return after lightly participating in minicamp this week, it’s natural to wonder again how he fits into his team’s offensive equation. Specifically, will he make the Browns better?

“Yeah, I certainly hope so,” offensive coordinator Alex Van Pelt said, via team transcript. “Anytime you can add a dominant athlete back on the field in your offense, it is only going to help us. He is an elite player. Not having him out there, we had to fight and claw to continue to have offensive success. I know it is a lot easier when you have great players.”

Interestingly, it hasn’t always been easier for ﻿Baker Mayfield﻿. The fourth-year quarterback has had the Beckham at his disposal for 23 of his 45 career starts. He’s thrown 32 touchdowns to 28 interceptions with the three-time Pro Bowler in tow, 43 and 15 without. Of course, it’s not possible to pin all of that down to one party or the other. But their chemistry, or lack thereof, will remain perplexing until those trends change.

Van Pelt, who arrived in Cleveland just last year, understandably dismissed the idea that Mayfield was better in the back half of 2020 because Beckham wasn’t available.

“I think Baker was better as the season went on, whether there had been Odell or not still out there,” Van Pelt said. “He started to understand the offense more and understand what we were asking him, got his footwork right. He got better, regardless of who was on the field. As I said earlier, you are always better with great players. Anytime you take a great player off of the field, you are going to have to find ways to generate more offense. We will be better with Odell, no doubt.”

The sample sizes for all of this data is still relatively thin, especially when considering Beckham has played less than two full seasons in Cleveland and Mayfield has already worked with three different coordinators. Time and continuity are of the essence for them, as individuals and as a tandem. At the very least, having Beckham on the field draws the attention of opposing defenses.

“Anytime you have a great athlete, you see a lot of coverage roll to that player,” Van Pelt said. “That kind of went away when Odell was injured. That opens it up for other players to be successful. It is not always great to be double teamed all of the time, but sometimes, that is going to happen when you are great. I would expect teams to have to honor Odell, and potentially at times, put two guys on him.”

That would lead to coverages benefitting everyone else on the Browns — Mayfield included.