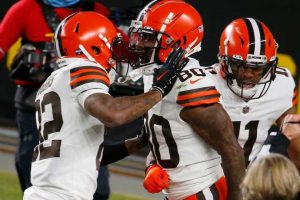 The Browns grew up Sunday night, and, fittingly, they did it at their big brother’s expense.

This year was different. The Browns grew up. They showed maturity in an eye-opening 48-37 victory at Pittsburgh in the AFC wild-card round.

Now, an unfamiliar reality has set in.

Cleveland waxed Pittsburgh a few days after Steelers receiver JuJu Smith-Schuster said the “Browns is the Browns.” The Browns put a new face on an AFC North rivalry that has been dominated by the Steelers this century.

The Browns are something else now. They led 28-0 after one quarter in a most stunning role reversal.

Pittsburgh imploded from the first snap, which sailed over Ben Roethlisberger’s head and was recovered by Cleveland’s Karl Joseph in the end zone. It committed four turnovers in the first half, and the Browns scored 21 points off those miscues. Roethlisberger, who entered the game with a 24-2-1 record against Cleveland, threw three first-half interceptions.

The Browns, meanwhile, looked at home with Baker Mayfield (just like in the Progressive commercials). Mayfield led a high-percentage attack that “Blitzburgh” could not crack. He finished 21 of 34 for 263 yards, with three TDs and no interceptions. One of the touchdowns was to Austin Hooper with 34 seconds remaining in the second quarter to give Cleveland a 35-7 halftime lead.

Choose your adjective from there. It was surreal, unbelievable, maybe impossible.

Born-again Browns fans can rejoice. First-year coach Kevin Stefanski missed the game after testing positive for COVID-19. Several players and other coaches were missing, too, as the team faced its biggest adversity in 2020. Acting coach Mike Priefer maintained a steady game plan on both sides, however, and Cleveland avoided a redux of the second-half meltdown in the 2003 wild-card matchup.

The Browns grew up, and now they’re worthy of the label “Super Bowl contender” along with the other seven teams still in the playoff field.

Cleveland earned that status with an 11-5 regular season led by an even-keeled coach who has maximized the talents of his franchise quarterback. Who believed the Browns would be in this position when Mayfield fumbled that fourth-quarter snap against the Jets in Week 16 given how much the roster was riddled with COVID-19 issues? Who would have believed it in a week where Cleveland didn’t practice until Friday?

“We believe,” Mayfield said on the NBC telecast afterward. “The people on the outside don’t matter to us. It’s on the inside. We believed the whole time.”

There was a brief glimpse of generational franchise misfortune in the second half. Pittsburgh cut the lead to 35-23 and had a fourth-and-1 at their 46 to open the fourth quarter. Then it made a call that will be questioned for a long time. Instead of going for it, the Steelers opted to punt from their 41 after attempting to draw the Browns offside and then taking a 5-yard delay of game penalty.

After that, there would be no “only in Cleveland” moments. Instead, there was just a mature response. The Browns immediately answered with a six-play, 80-yard touchdown drive punctuated by a 40-yard pass from Mayfield to Nick Chubb on a screen for the score.

Roethlisberger, who finished 47 of 68 for 501 yards and four touchdowns, threw his fourth interception to a leaping Sione Takitaki with 3:16 remaining. That was the effective end of the quarter-century playoff-win drought.

The role reversal is complete. Pittsburgh, the longstanding leader of the AFC North, will watch the Browns and Ravens play in the AFC divisional round. That new arrangement could also be a sign of a shift in the division for years to come, one led by Mayfield and Baltimore’s Lamar Jackson, who picked up his first playoff victory Sunday. The Steelers will have far more questions in the offseason, including whether it truly is time to start over.

The Browns? They’ve been there, done that too many times since 1999. Now they appear ready for NFL adulthood, and the journey to it continues Sunday in Kansas City against the defending Super Bowl champion. That is the next step in the process of becoming a champion.

It will be a full-grown football game.

And, yes, the Browns finally belong there.