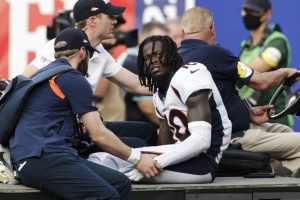 Jerry Jeudy avoided serious injury Sunday in a play that initially appeared to be headed toward a much worse outcome. How long he’ll be out, however, remains to be seen.

Jeudy suffered a high ankle sprain in the Broncos’ win over the Giants, exiting after catching six passes for 72 yards. Broncos coach Vic Fangio said despite suffering the injury, the sprain was the worst of the damage, leading to a better chance for a return.

“Everything else checked out good,” Fangio said. “He’s going to miss some time. It’s hard to put a timetable on it right now.”

The timetable could include a trip to injured reserve, an option Fangio said is included in consideration, but has not yet been selected as the best course for Jeudy. Thanks to the carry-over of the league’s COVID-19 roster rules in relation to injured reserve, if Jeudy were to go on IR, he’d only have to miss three weeks before being eligible to return.

Jeudy’s involvement is key to a Broncos receiving corps that is young, deep and balanced, but knows its best route runner is the former Alabama star. Sunday was a perfect example of this reality. Despite his departure, Jeudy still finished as Denver’s leading receiver, creating space throughout the duration of his participation with expert-level route running worthy of clips and tweets.

Bridgewater ended up throwing for 264 yards, of which Jeudy accounted for more than 25 percent. As a team, Denver gained 420 yards of total offense. Even without Jeudy, the Broncos were still able to pull away, winning 27-13.

They can certainly win games without Jeudy, but Denver will understandably want him back as soon as it is sensible.