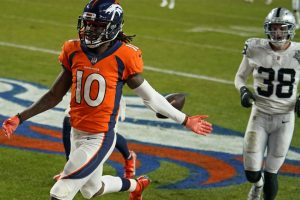 The wideout finished fifth in his class in receiving, netting 856 yards on 52 catches with 3 TDs, well behind ﻿Justin Jefferson﻿’s record-setting 1,400-yard campaign. Jeudy’s ups and downs were highlighted by several pressure-packed drops.

“I feel like I’ve matured,” Jeudy said Tuesday, via the team’s official website. “You don’t know what you’re getting yourself into [during] your first year of doing something. This is my second year and I feel like I have learned a lot from my first year. I know how to overcome whatever I had in past years to make this year better.”

Having a full offseason program should help Jeudy in Year 2. Many receivers make a leap from their rookie to sophomore campaigns. Despite wideouts entering the NFL more capable of making immediate contributions than years of old, seasoning still matters.

Jeudy characterized the drop problem as a concentration issue, noting he was “so quick to catch and run to hurry up and make a play instead of catching first, then [running].”

The Broncos wideout was credited with 10 drops last season and an 8.8 drop rate, second only to Diontae Johnson among receivers with at least 100 targets. NextGen Stats credited Jeudy with a -10 catch rate above expectation. The next closest wideout in that metric was Johnson with a -6.9.

The Broncos are confident that Jeudy will move past the drops — a notably fickle stat — in 2021.

“I think he’s in a far better place than he was last year at this time,” head coach Vic Fangio said. “I think a big that happened with Jerry — like I told you guys back when it happened, in the 15th game last year when he had some drops in that game [against the Chargers] — I thought it was going to be a defining moment in his career and how he played the following week. Then in our last game, he had a very good game and caught a bunch of balls for a bunch of yards. I think that was a very defining moment in his career. I see a more focused and more diligent receiver on the details. He knows he can’t slack. I see a much more mature guy right now.”

Negating the drops isn’t Jeudy’s only focus. The 22-year-old said improving his route running will aid his improvement.

The Broncos selected Jeudy in the first round last year with the thought that he could exploit matchups opposite Courtland Sutton. The latter’s early injury in 2020 wiped out that plan, putting more on the rookie’s plate than intended. In Year 2, Sutton’s return and a full offseason program for Jeudy should get that plan back on track.