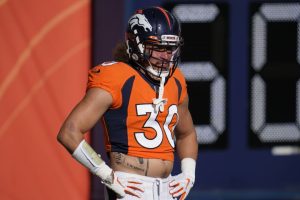 From high school to college to the NFL, Phillip Lindsay has only played football in Colorado. That incredible run is about to end.

The Denver Broncos announced Thursday morning that they have mutually decided to part ways with the running back.

The decision comes after discussions with Lindsay’s agent, Mike McCartney, regarding the club’s restricted free agent tender. The Broncos decided to rescind the tender, which was placed at the lowest level giving Denver the right to match any contract. Rescinding the tender makes Lindsay an unrestricted free agent.

The RFA tender made teams reluctant to offer the running back a deal with the assumption Denver would match the offer. Rescinding the tag puts the Pro Bowl player on the open market with no strings attached.

Lindsay has been a wonder in Denver since going undrafted in 2018 out of Colorado. He immediately became the Broncos’ best back, generating 1,037 rushing yards on just 192 attempts (5.4 yards per carry) with nine TDs. He’d have likely set the rookie rushing record for an undrafted player at the time had he not missed Week 17 due to injury.

A pint-sized power runner at 5-foot-8, Lindsay combines speed to the edge with tackle-breaking ability. The running back can win in a phone booth with jukes and spins or out-run defensive backs in space.

Despite opening his career with back-to-back 1,000-yard rushing seasons, somehow, Lindsay remains underrated and overlooked. He’s yet another case of draft perceptions carrying on throughout a career.

Denver’s loss will be another team’s gain. Despite dealing with injuries in 2020, the 26-year-old showed when given a decent workload that he can be a difference-maker out of the backfield. Look no further than the Broncos’ Week 6 win over New England, in which Lindsay generated 101 of Denver’s 299 total yards. Having proven he can excel in a committee should only add to a club’s desire to sign the RB.

With the restricted free agent tender no longer hovering over his head, Lindsay should find a new home in short order.

I’m very appreciative for my time with the Denver Broncos. As a Colorado kid, I was able to fulfill my dream of playing for my home team. I want to thank my teammates, coaches, staff and everyone involved in the Broncos organization who made this possible for me. https://t.co/drjm9qep4E