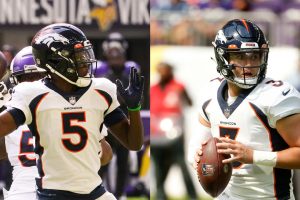 ﻿Drew Lock﻿ and ﻿Teddy Bridgewater﻿ did what they were supposed to do Saturday against Vikings backups in their preseason opener.

The setting made for sterling box scores for both quarterbacks, but did little to help coach Vic Fangio decide on his starting quarterback for the 2021 season.

“I thought they both played very well. Kinda validated what I been saying all camp that they’re even-steven,” Fangio said after the game. “Thought Drew played well. But they both were helped by the good play of our overall offense. We ran the ball well early. That sets up the play-action game. Then we run a good play pass and K.J. [Hamler] gets behind the defense, Drew made a good throw. And Teddy gets in there and he moved the team very well also. I don’t think any separation happened today in this game if anybody’s looking for it.”

Lock started and quickly helped drive the Broncos down the field, including a 25-yard strike to an open Hamler over the middle. A penalty wiped out an opening drive touchdown run by Javonte Williams. Then Lock couldn’t connect with Jerry Jeudy on a slant in the end zone on fourth down to turn it over.

Lock’s second drive was brief and beautiful. He hit a wide-open Hamler deep on the first play for an 80-yard TD. It was a perfect ball in stride from Lock on a busted coverage. The third-year QB led another TD drive, including finding Jeudy over the middle for a big YAC play and a 4-yard strike to Trinity Benson for the score. Lock was unperturbed by the rush and got out of the pocket at times when needed.

Bridgewater took over and continued to rack up scores. Teddy B, playing in Minnesota where he began his career, displayed his trademark precision, getting to his checkdowns and finding open receivers with ease. Bridgewater got through his reads and allowed his wideouts to make plays, managing the game with aplomb while playing with backups. The veteran QB showed good pocket presence and had a TD run negated by a penalty. He returned after halftime to lead a quick touchdown drive ending with a strike in the corner of the end zone. Bridgewater didn’t have a wayward pass on the day while seeing little pressure.

It was what we expected from each QB.

The battle to lead the Broncos playoff-caliber roster into Week 1 remains a dead heat.

Bridgewater will start next week against Seattle, with Lock entering second. We’ll see if either earns a slight advantage after two preseason games.

“I’m thrilled that both of them played good,” Fangio said. “I want it to be a hard decision, not an easy one.”