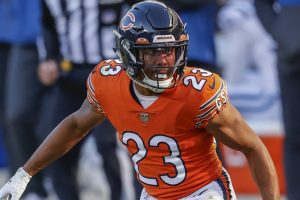 Not long after landing in free agency, Kyle Fuller has found a new home.

The two-time Pro Bowl cornerback has agreed to terms with the Denver Broncos on a one-year, $9.5 million deal, NFL Network’s Tom Pelissero reported Saturday, per an informed source. The deal will include $9 million fully guaranteed, Pelissero noted.

From the moment news of Fuller’s imminent release was initally reported on Thursday, the Broncos began circling the wagon around the 29-year-old’s availability. Now, only a few hours after his time in Chicago officially came to an end, Fuller will begin anew in Denver.

The signing will reunite the talented corner with coach Vic Fangio, his defensive coordinator in Chicago for four seasons. Fuller had a career year in 2018 under Fangio’s tutelage, compiling 55 tackles, 21 passes defensed and a league-leading seven interceptions en route to earning first-team All-Pro honors and his first of consecutive Pro Bowl nods.

In an offseason where many clubs have been looking for ways to finesse their way into more cap space, the Broncos have spared no expense in its quest to re-tool their secondary. The team began the week by giving veteran CB ﻿Ronald Darby﻿ a three-year, $30 million deal ($19.5M fully guaranteed) before finalizing a long-term deal with star safety ﻿Justin Simmons﻿ on Friday.

After finishing in the bottom 10 in interceptions and tying for 16th in receiving yards allowed per game in 2020, Broncos GM George Paton has made it clear he wants to see better play from the secondary. Adding Fuller is certainly a step in the right direction.