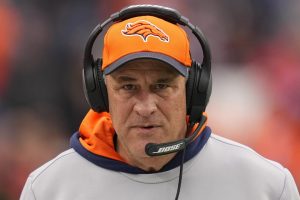 After more than 30 years coaching in the NFL, Vic Fangio got the long-awaited opportunity in 2019 to be an NFL head coach.

However, after three seasons in which his Denver Broncos failed to make the postseason, Fangio’s opportunity has been lost.

Fangio was fired Sunday morning, one day after a season-ending 28-24 loss to the Kansas City Chiefs, NFL Network’s Ian Rapoport and Tom Pelissero reported. The team later confirmed the move.

“The foundation is in place for this team to accomplish great things,” Fangio said in a statement. “The future is bright for the Denver Broncos, and I wish the organization nothing but the best.”

In the lead-up to Denver’s final game of the season, Fangio met with Broncos first-year general manager George Paton to lay out a case for remaining as the team’s head coach. Though no decision was made at the time, it was thought by many that Paton would move on, and he has.

“I have tremendous respect for Vic and all he’s accomplished in the NFL,” Paton said in a statement. “Over the past year, I appreciate his partnership, friendship and the tireless work ethic he demonstrated as our head coach. …

“With the foundation in place, the progress that’s been made and the resources we have to get better, I’m excited about the future of our team. We will find an outstanding leader and head coach for the Broncos and our fans.”

NFL Network’s Mike Garafolo reported Fangio again made his case to Paton following Saturday night’s loss, noting the team’s disparity at quarterback compared to the rest of the AFC West. But Paton wants to bring in his own coach, Garafolo added.

“George will have full authority to select the next head coach of the Broncos,” Broncos CEO Joe Ellis said in a statement. “This is his decision and his program.”

It signals another sizable shift for the franchise, which traded away the face of the franchise, Von Miller, earlier in the season, is in the market for yet another starting quarterback and will now be looking for a new head coach, as well.

As for Fangio, 63, it’s likely he’ll have little problem finding a role as a defensive coordinator if he desires one. He was previously a DC for the Chicago Bears, San Francisco 49ers, Houston Texans, Indianapolis Colts and Carolina Panthers.

Though promise and talented rosters accompanied each of Fangio’s seasons in Denver, he posted three straight losing seasons as the club continued to flounder after its Super Bowl 50 win in the 2015 season.

Denver has failed to return to the playoffs in each of the last six seasons since its Super Bowl win and has run up five consecutive losing campaigns in the process.

Fangio was ultimately unable to alter the Broncos’ course, and another fresh start beckons for him and the franchise.

The 2018 AP NFL Assistant Coach of the Year after helming a stellar Bears defense, Fangio was plucked by the Broncos ahead of the 2019 campaign.

Heading into Saturday’s game against the Chiefs, Fangio’s Broncos defense was No. 9 overall in the NFL and No. 3 in scoring. It was rarely defense that was the problem under Fangio’s umbrella, though.

Issues on offense, and particularly at the quarterback position, have plagued the Broncos prior to Fangio’s arrival and continue upon his departure.

In Fangio’s three years in Denver, seven players played at quarterback, from Joe Flacco to Teddy Bridgewater﻿, with plenty of Drew Lock and even a Kendall Hinton cameo in between.

None of the QBs called to action provided a long-term answer — or much of a short-term one, at that. Bridgewater, who missed the final stretch of the 2021 season with a concussion, is set for free agency, and Lock, though he has one season left on his rookie contract, might not be long for the team, either.

Fangio had good relationships with players and the front office alike, and was respected for his work ethic and defensive mind. But he was unable to rescue the Broncos from their postseason drought.

So, Denver has parted ways with Fangio and is looking for a new direction, yet again.