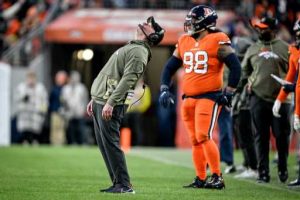 Among the several season-long trends for Denver’s offense that did not change Sunday with quarterbacks coach Klint Kubiak calling plays is the team’s third-down struggle.

The Broncos converted just 3-of-12 overall against Las Vegas as their season conversion rate fell to 28.2%.

Only Sunday’s opponent, Carolina, is worse in the NFL this year at 28% and only three teams in the past decade have played a full season at Denver’s level of futility.

Head coach Nathaniel Hackett said Tuesday that Denver’s practice structure changes based on factors like short weeks or extra days and is also based on the health of the team. He also acknowledged that they’ve made some intentional adjustments to how they go about preparing for games because of their situational woes.

“We’ve definitely changed some things, we’ve added some different kinds of periods, some competitive periods,” Hackett said. “We wanted to improve our red zone, so we started going some competitive periods vs. our defense. Obviously our defense is very, very good, so we wanted to get some reps against them. Both in third down and red zone. So we kind of mixed that all up and we’re just trying to do as much as we can to get that rhythm back.

Ware a HOF semifinalist. Former Denver defensive lineman DeMarcus Ware is one of 28 modern-era semifinalists for the NFL’s 2023 Hall of Fame class.

Ware spent the first nine years of his career with the Cowboys and then his final three with the Broncos. From 2014-16, he had 21.5 sacks and 44 quarterback hits, made the Pro Bowl twice and was part of Denver’s Super Bowl 50 championship defense.

In January, the Hall of Fame selection committee narrows the group to 15 finalists.

Allen, a fourth-year player, has appeared in 36 career games with three teams and this season has been primarily a special teams player for the Browns. He provides depth at inside linebacker, where the Broncos lost Jonas Griffith likely for the season to a foot injury last week.

Edmonds will miss substantial time with a high-ankle sprain.

Players on the mend. Denver’s first injury report doesn’t come out until Wednesday, but Broncos receivers, Jerry Jeudy and KJ Hamler, were not present during the open period of a walkthrough.

In terms of players on injured reserve, Hackett said he saw Tim Patrick, recovering from an August ACL injury, in the weight room and had a conversation recently with running back Javonte Williams (knee) recently, too. They are just two of many players who are out for the season with injuries.

“(Patrick) wants to come back and play and everybody wants to,” Hackett said. “Just looking at Javonte, the minute I saw him he was talking about how he wants to get back in the meetings. That’s what you love to see is that the guys are working hard, they want to get back. Obviously it’s crushing when you lose any player, especially for the season, but to see him and how he’s attacking it and at the same time even just wanting to be in the meetings is so great.”