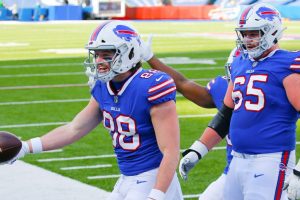 On second-and-3 from the Colts’ 3-yard line, Allen took the snap on what looked like a designed run but was quickly met by Indianapolis defenders Tyquan Lewis and Anthony Walker. Allen scrambled to his right and stayed upright just long enough to see Knox wide open in the end zone. As he was being brought to the ground, Allen heaved the ball toward Knox, who caught it with nobody around him.

Allen was electric on the drive, scrambling 12 yards for a first down before hitting wide receiver Stefon Diggs for a 36-yard gain on the next play. Diggs was hit almost immediately after the catch but hung on to set the Bills up at the Colts’ 37-yard line. Allen completed 5 of 7 passes on the drive for 67 yards and the score.