Bills GM Brandon Beane on Josh Allen contract talks: 'There will be no negotiating in-season' 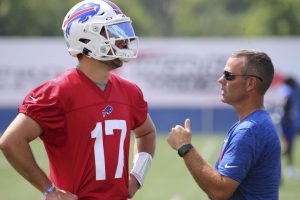 Buffalo Bills quarterback ﻿Josh Allen﻿ has made it known he’s not worried about getting an impending extension done.

General manager Brandon Beane has now made it known the club won’t worry about an extension during the upcoming season, stating that the Bills and Allen will table discussions if a new deal is not worked out prior to the 2021 campaign.

“Josh and I are in lockstep on that,” Beane told the Associated Press. “There will be no negotiating in-season. At some point we will press the pause button.”

Allen told NFL Network’s Kim Jones on Saturday that a new deal was the “least of my worries.”

For Beane, it will be a topic of discussion for at least a little while longer as he’s hopeful of reaching an agreement this year, but was steadfast that talks would be halted if something didn’t come to fruition before the year.

“We’ll see here soon. We’re in August, so I’d say we’re down to a few weeks to either get this done or delay it, and try it again in 2022,” he said. “Hopefully, we can get something done this year. But if not, we’ll be excited. Josh knows. He and I have had great conversations this spring and summer about it.”

The reigning AFC East champions and AFC Conference finalists will kick off their season on Sept. 12 against the Pittsburgh Steelers.

Taken by Buffalo with the No. 7 pick of the 2018 NFL Draft out of Wyoming, Allen exploded in 2020, throwing a franchise-record 37 touchdown passes. He had 4,544 yards through the air and 421 yards and eight touchdowns on the ground to lead the Bills to a 13-3 campaign and a march to the AFC Championship Game.

Buffalo picked up Allen’s fifth-year option, so he’s on the books for the Bills through 2022 as of now. That could change in the coming weeks, but according to Beane, if not by then, they’ll circle back in 2022.

Training camp is finally here! Be sure to check outNFL Network’s extensive live coverage, including Inside Training Camp every day.