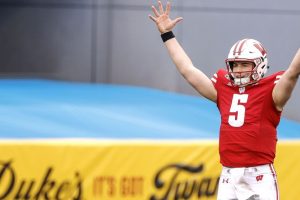 Bill Connelly is a staff writer for ESPN.com.

Wisconsin plays Wisconsin football. Iowa is Iowa. Northwestern does Northwestern things. Minnesota is increasingly Minnesota. The Big Ten West might have more proven entities than any other division in college football. But for such a reliable division, the West has been pretty difficult to forecast of late.

In 2018, defending champion Wisconsin was voted a runaway favorite to repeat, with only Iowa likely to offer major resistance. Northwestern won the division by three games.

In 2019, turnover prompted a shakeup, and with Scott Frost seemingly ready for a UCF-like second-year leap, Nebraska was voted a slight favorite over Iowa. Wisconsin and Minnesota tied for the title.

In 2020, Wisconsin and Minnesota were picked to once again lead the way. Instead, Northwestern beat out Iowa by a half-game.

We’ll see who ends up the media favorite soon enough. My guess is that, with most of last year’s starters returning — and with both Iowa and especially Northwestern losing quite a few key contributors — Wisconsin will again get the nod. SP+ projects the Badgers and Iowa as the most likely teams to make a run.

Congrats in advance, then, to Purdue for winning the division. Let’s preview the Big Ten West!

Every week through the summer, Bill Connelly will preview another division from the Group of 5 and Power 5 exclusively for ESPN+, ultimately including all 130 FBS teams. The previews will include 2020 breakdowns, 2021 previews and a brief history of each team in one handy chart. The series has thus far covered the Conference USA East and West, the MAC East and West, the MWC Mountain and West, the Sun Belt West and East, the top and bottom half of the AAC, the seven Independents, the ACC Atlantic and Coastal, the Pac-12 North and South, and the top and bottom half of the Big 12.

In 2016, Lovie Smith’s first year in charge, Illinois ranked 94th in SP+. In 2020, his last, the Fighting Illini ranked 89th. They were starting over then, and they’re starting over now.