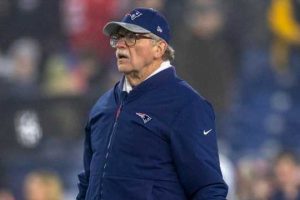 “He’s literally been involved in every single aspect of the football program at every level,” said Belichick said, via Jim McBride of the Boston Globe.

A former offensive assistant coach dating back to 1975, Adams has been a longtime Belichick confidant, including the stint with the Cleveland Browns. Adams joined the Pats in his research director role in 2000, the same year Belichick arrived and been part of all six Super Bowl wins.

Adams famously was the man who recognized a goal-line play the Seattle Seahawks liked to run ahead of Super Bowl XLIX. The Pats prepared for the play during the week, which ultimately led to undrafted rookie ﻿Malcolm Butler﻿ making the game-winning interception.

Late in the 2020 season, Adams detailed his career and job alongside Belichick through the Patriots dynasty.

From his passion for the game to his tactical expertise.

Behind the scenes with Patriots Director of Football Research, Ernie Adams, presented by @Bose. pic.twitter.com/ONcWagwtQK