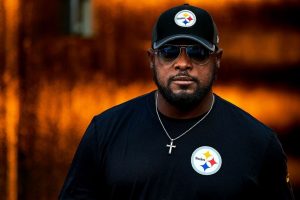 PITTSBURGH — While the rest of Pittsburgh was on the edge of their seats watching the Chargers and Raiders late Sunday night, Steelers coach Mike Tomlin was asleep.

Tomlin admitted he didn’t see the game-winning, overtime field goal by Raiders kicker Daniel Carlson that ultimately sent his team to the playoffs.

“I’m probably better off not having watched it.”

He’s not the only Steeler who missed the end of the game in real time. Wide receiver Ray Ray McCloud gathered with some teammates to watch the game, but because they kept rewinding it, the group was behind when Carlson’s field goal prevented a tie that would’ve kept the Steelers (9-7-1) out of the playoffs.

“My little brother called me,” McCloud said Monday. “He was like, ‘It’s rigged, bro. It’s rigged.’ Then he called me back and was like, ‘You’re good, you’re good.’

“I was like, ‘They made it?’ So when I watched it personally, I already knew they made it. It was definitely a relief. It was a fun game.”

Now that the Steelers — who had just a 9% chance to make the playoffs entering the last day of the regular season according to ESPN’s FPI — are in the postseason, the challenge ahead is a tough one. They’ll face the Kansas City Chiefs (12-5) at Arrowhead Stadium. Just three weeks ago, the visiting Steelers were blown out by the Chiefs 36-10.

Tomlin also acknowledged it wasn’t quite a performance his team could take much from.

“I don’t know how much you learn from it, to be quite honest with you,” he said. They smashed us so definitively. More than anything, it’s like a reboot.”

In that game, Chiefs quarterback Patrick Mahomes completed 23 of 30 attempts for 258 yards and three touchdowns, while Steelers quarterback Ben Roethlisberger exited early and threw for 159 yards with a touchdown and an interception.

Since then, the Steelers have gutted out two straight wins against Cleveland Browns and the Baltimore Ravens to reach the playoffs.

“I can’t say enough about the group,” Tomlin said. “Their buy-in, their fight, their selflessness. You’re not in this tournament unless you’re all of those things and then some.

“We don’t think we’re unique compared to the other 13 teams, but we are appreciative of what it is that we’ve had to do to be a part of this field.”

The last two wins were partially fueled by the urgency of Roethlisberger’s lasts — his last home game and last regular-season game. And Tomlin said it’s “our intention” to keep riding that wave.

He also said the experience of those tight games coupled with the rollercoaster of the season should help his club in the playoffs.

“… I think we’re able to execute individually and collectively because of that experience. Hopefully, that helps us as we proceed into the playoffs. We understand that the playoffs are a different level.”