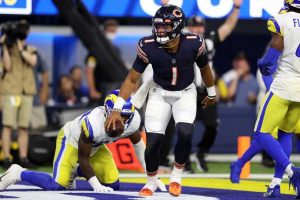 Justin Fields is on the board.

The Bears used their first-round quarterback sparingly in their “Sunday Night Football” loss to the Rams, but he made the most of his opportunity in the third quarter. Field took off to his right after the snap, followed a blocker and dived into the end zone with a Los Angeles defender clinging to him for his first NFL touchdown, a 3-yard rush that cut the Rams’ lead to 20-14. LA went on to win 34-14.

Fields completed both his passes for 10 yards to go with the touchdown rush, which was his lone carry.

Bears fans have wanted to see Fields start since he was drafted — and certainly since his dynamic debut in the preseason — but coach Matt Nagy opted to start veteran Andy Dalton rather than the 11th overall pick of the 2021 NFL Draft.

Fields still saw game action Sunday, however. He was called on during the team’s first drive when it was in the red zone. There, he threw a 9-yard pass to Marquise Goodwin. Dalton returned and, after a false start and a Chicago timeout, threw an interception in the end zone.

Fields came back in with 3:50 left in the first and was used to try to draw attention away from Goodwin on a jet sweep, but the play was blown up for a 2-yard loss. He returned to the field in the third quarter and flipped a shovel pass to Allen Robinson for 1 yard.

During his time at Ohio State, Fields was a dynamic presence as he twice took the Buckeyes to the College Football Playoff and once to the national championship game. For his Buckeyes career, he completed 68.4 percent of his passes for 5,373 yards with 63 touchdowns to only nine interceptions, while also rushing 218 times for 867 yards and 15 more scores.

Dalton said he won’t “look over his shoulder” at Fields, but if the rookie impresses, even in limited action, Nagy will be forced to make a decision on when to test Fields as the future in Chicago.