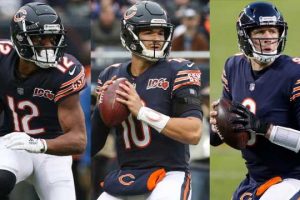 Throughout an often-trying 2020 campaign for the Chicago Bears, their offensive tribulations were at the forefront.

Thusly, offensive quandaries for the Bears are the most prevalent in the offseason, most notably the future of standout wide receiver ﻿Allen Robinson﻿ and the fate of the quarterback position, which was shared and scrutinized equally by ﻿Mitchell Trubisky﻿ and ﻿Nick Foles﻿ last season.

With his contract up and the franchise tag deadline looming on March 9, Robinson’s uncertain future must come into focus first for the Bears.

Though general manager Ryan Pace told the media Tuesday no “firm decision” had been come to as of yet regarding Robinson, whether via franchise or transition tag or the long-term deal Robinson has long wanted, Pace seemed to be leaning to A-Rob’s future being in Chi-Town.

“We love Allen Robinson. He’s a great player for us,” Pace said, via the Chicago Sun-Times’ Patrick Finley. “We want to keep our good players. And Allen is a good player for us.”

Though the Bears offense has sputtered along for the past two seasons, Robinson has emerged as a top receiver in the NFL with back-to-back 1,000-yard campaigns and averaged 100 catches per season in that span.

Robinson was looking for an extension throughout 2020 and was unable to get it. After the Bears’ season ended with a lopsided loss to the Saints on Super Wild Card Weekend, silenced reigned in terms of contract talks.

“It’s never easy, it’s never fun, but it’s real and that process is, what you try to do, ultimately, is you try to get to that win-win in a perfect scenario,” Bears coach Matt Nagy said Tuesday, speaking to the press shortly after Pace. “A-Rob knows how much we love him. A-Rob knows how much that me, as a head coach, and Ryan as a general manager, the importance that he brings to this city, to the organization, to his teammates, to all of us.”

While Nagy’s hoping for a win-win situation, Pace was a bit more pragmatic.

“We have a ton of respect for Allen,” Pace said, via Finley. “We have to do what’s best for the Bears, too.”

Robinson’s made it known “everything’s on the table” when it comes to his future and that familiar term was used by Pace in regard to a seemingly never-ending conundrum at QB for the Bears.

With former first-round pick Trubisky having struggled mightily in 2019, the Bears traded for Foles last offseason. Neither was able to breathe sustained life into the dormant Bears offense in 2020. The Bears didn’t pick up the fifth-year option on Trubisky’s rookie deal, Foles has two seasons left on his current deal and Chicago has been reported to have interest in seemingly every quarterback entering free agency or swirled about in trade talk.

When asked if retaining Trubisky was an option, Pace said it was — just along with everything else.

“That’s gonna be part of our offseason plan,” Pace said, via NFL Network’s Stacey Dales. “We’re not gonna lay that all out right now. Everything’s on the table with all the quarterbacks.”

Just what is Nagy looking for in his potential 2021 starting quarterback?

“Every quarterback leads in different ways. I was around a guy, Alex Smith, who was a happy medium. Where he wasn’t a yeller and a screamer at the guys, but he wasn’t quiet. He was right down the middle. And every guy has kind of their own ways how they do it, but they all lead in a certain way and they multiply the players around them,” Nagy said. “So I’d say leadership, decision-making and if you have some versatility as a quarterback with your legs, great. If you don’t, no problem, we can work around it.”

Since it was reported that Smith was likely to be released by Washington, the reigning AP Comeback Player of the Year has been associated with the Bears as a potential landing spot due to Smith and Nagy’s time together with the Kansas City Chiefs.

And so it goes that everything is on the table for the Bears and their beleaguered offense.

Will Robinson be back — on a tag or a long-term deal? And if he does return, who’s going to be throwing him the ball?

Only the offseason days ahead will answer those questions.