Home » NFL » Barnwell ranks the 0-2 NFL teams from done to playoff long shot: Are the Bengals in trouble?

Barnwell ranks the 0-2 NFL teams from done to playoff long shot: Are the Bengals in trouble? 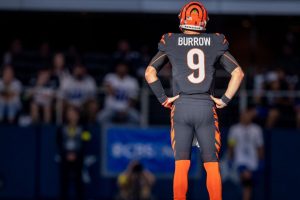 Bill Barnwell is a staff writer for ESPN.com.

Every NFL season starts with hope inside a locker room and within a fan base. A loss in Week 1 is damaging. A second consecutive loss in Week 2 is an immediate crisis. Teams can make it to the postseason after starting 0-2, but a two-game losing streak to begin the season puts their backs against the wall before the campaign has even really begun.

Since 2022, just 9.6% of teams that started 0-2 have made it to the postseason, and while that seems survivable, no 0-2 team has made it to the postseason since 2018. The 17-game season gives teams an extra week to catch up to the rest of the league, but only one of the seven teams that started 0-2 a year ago posted a winning record, and that team — the 9-8 Colts — missed out on a playoff berth because it lost to the Jaguars in Week 18.

With five teams starting 0-2 in 2022, history tells us it would be a surprise if even one of them made it to the postseason. I’ll hold out hope that at least one of them turns things around. Let’s run through those five 0-2 teams (in order of least to most likely to make the playoffs) and detail what has gone wrong for them and what they can do to fix things before their seasons collapse.

The losses: vs. New Orleans, at L.A. Rams

Facing a schedule that began with two likely NFC playoff contenders, the Falcons have given a solid accounting of themselves. They outplayed the Saints for most of Week 1 before collapsing in the fourth quarter, with a brutally conservative decision from coach Arthur Smith breaking their back.

Last week’s loss to the Rams flipped the script, as the Falcons turned things on in the second half. Down 28-3, they scored two touchdowns amid a Rams field goal, then blocked a punt and returned it for a third. Smith correctly went for two while down eight points and converted, making the score 31-25 with five minutes to go. Atlanta then had a short field to take the lead after forcing a Cooper Kupp fumble, only for quarterback Marcus Mariota to be intercepted in the end zone to seal things.

With slightly better execution, the Falcons could be 2-0. Mariota fumbled away a red zone opportunity with a big lead in the third quarter against the Saints. They had one red zone whiff in each game so far, while opposing offenses have scored seven touchdowns and a field goal in eight trips. Kicker Younghoe Koo, who went 27-of-29 on field goal tries last season, already has two misses (one was a blocked 63-yarder to end the Saints game).