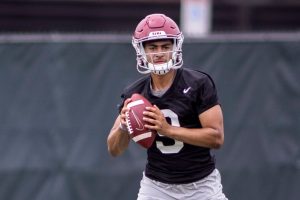 The inevitable became official Monday as top-ranked Alabama named Bryce Young its starting quarterback for Saturday’s game against No. 14 Miami.

Young, a sophomore and former five-star prospect, spent last season as the backup to Mac Jones, who was selected by the New England Patriots in the first round of this year’s NFL draft.

As a freshman, Young appeared in nine games, including the national championship win over Ohio State. All told, he completed 13 of 22 passes for 156 yards and a touchdown last season.

During the course of the offseason it became clear that Young would be tabbed as Jones’ successor. Alabama coach Nick Saban often praised Young and placed him with the first-team offense in the spring game.

“Bryce has done a nice job,” Saban said Monday. “He’s confident and accurate with the ball.”

Young even spoke to the media during fall camp, which is unusual because Saban typically doesn’t allow the quarterback to speak publicly until after he’s been named the starter. Young said playing behind Jones was a “huge learning experience” for him.

Young will make his first career start against Miami at Mercedes-Benz Stadium in Atlanta, and will do so as one of the faces of players’ newfound ability to profit off their name, image and likeness.

As of late July, Young had already signed deals worth in excess of $800,000, according to sources. Saban marveled at Young’s ability to reach nearly seven figures worth of deals so soon.

Preseason All-SEC tight end Jahleel Billingsley was not listed as the starter on the Week 1 depth chart. Billingsley and Major Tennison were listed as co-backups behind starting tight end Cameron Latu.

Saban has singled out Billingsley twice this offseason for not doing everything he needed to in practice.

Saban also said backup linebacker Quandarrius Robinson has been suspended following an arrest over the weekend for driving under the influence.