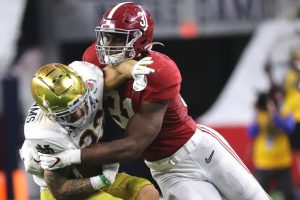 No. 1 Alabama, already playing without cornerbacks Josh Jobe and Jalyn Armour-Davis, had star outside linebacker Will Anderson leave Saturday’s game against Mercer with an apparent leg injury.

Anderson, one of the top pass-rushers in college football, appeared to take a helmet to his knee when a Mercer player cut block him.

He was looked at by trainers on the sideline and was then escorted to the locker room with the No. 1 Crimson Tide leading 38-7 midway through the third quarter.

It wasn’t clear why Jobe and Armor-Davis weren’t available for Saturday’s game. An Alabama spokesman said coach Nick Saban would address their status after the game.

Jobe was spotted in street clothes for the top-ranked Crimson Tide’s home debut against the FCS team. Neither went through pregame warmups.

Freshman Kool-Aid McKinstry, one of Alabama’s top recruits in the latest class, started opposite junior Marcus Banks at cornerback.

Anderson, a preseason All-SEC selection, had a sack during Alabama’s season-opening win over Miami. He was third in the SEC with seven sacks last season, and third in tackles for loss with 10.5.

No. 1 Alabama goes on the road next Saturday to play No. 13 Florida.