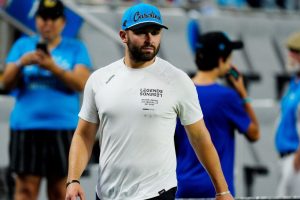 Now we know why.

Or “mess” talk, as Thompson put it Friday when explaining how the former Cleveland Browns star became his passenger for the 90-minute drive from Charlotte, North Carolina.

“Bake texted me and DJax [Donte Jackson] talking some mess,” Thompson said. “We were just going back and forth. We just went to what time are you going down there? He was like, ‘Carpool?’ And I said yes.”

So what was this “mess?”

“That’s for me to know and y’all just to ask questions,” said Thompson, who began training camp on the physically unable to perform list after having minor offseason surgery on his left knee.

Mayfield is known for talking mess, or “trash talking” as others put it. He gave a small sample of it when he and Thompson arrived at camp, saying Thompson “uses his blinker everywhere.”

Mayfield showed a little bit of his edginess again Tuesday when he playfully yelled for a fan with one of his old Cleveland Browns jerseys to “put that jersey away.”

When a woman who drove her son to Spartanburg from Ohio told him Wednesday she wasn’t a fan of the Browns, Mayfield responded he wasn’t either.

Then there was the 2017 college game between Mayfield’s Oklahoma Sooners and the Baylor Bears coached by Matt Rhule, now the head coach of the Panthers. Mayfield told some of the Baylor players after a pre-game scuffle, “You forgot who daddy is. I’m going to have to spank you.”

That Mayfield has a reputation for talking “mess” doesn’t bother Thompson. He compared him to former Panthers quarterback Cam Newton, who talked trash all the time, particularly in training camp.

In 2015, Thompson’s rookie season, Newton and cornerback Josh Norman talked so much trash that the two wound up in a training camp fight after Norman intercepted the eventual NFL MVP.

“He’s competitive,” Thompson said of Mayfield. “That’s how Cam was in 2015. Cam was competitive, talking mess, him and TD [Thomas Davis]. We’re all competitors.

“I love a quarterback who talks trash. We’re going to talk trash right back to you. Low blows, high blows, it don’t matter. At the end of the day we’re football players, we’re brothers, and we’re all going for the same goal.”

Carolina wide receiver Robbie Anderson wasn’t talking trash when he tweeted “Nooooo” to the initial news during the April NFL draft that the Panthers had interest in Mayfield.

He later said he was just standing up for his current quarterback, Sam Darnold. Anderson was asked Friday if he and Mayfield had a chance to talk about that now that Mayfield and Darnold are competing for the starting job.

“No,” he said. “That’s kind of like water under the bridge.”

Anderson didn’t even want to get into how Mayfield and Darnold were different personality-wise.

“One is Baker, one is Sam,” he said. “I’m not going to give a synopsis of their personalities.”

But Anderson did finally explain why he changed the spelling of his first name from Robby to Robbie during the offseason.

“That’s how I used to spell it when I was younger,” said Anderson, who changed his name to Robby initially before he went to college. “But I kind of like how it looks better on paper with the ‘ie.’ ”