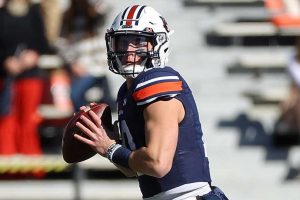 Iron Bowl week is officially here, and the trash talk is already flowing like toilet paper at Toomer’s Corner.

Auburn quarterback Bo Nix made waves in the rivalry on Monday after he appeared on “The Next Round” and claimed Alabama gets preferential calls from officials. He based his claim off Saturday’s meeting between the second-ranked Crimson Tide and No. 21 Arkansas, including a 40-yard touchdown reception by Jameson Williams that was reviewed by officials and ultimately upheld in a 42-35 win for Alabama.

Nix saw the game from his parents’ home after missing Auburn’s 21-17 loss to South Carolina after undergoing ankle surgery (he will not be available to play in Saturday’s Iron Bowl, either). Regardless, he noted that “controversial calls in that game (raised) some questions, for sure, I guess unless you’re an Alabama fan.”

The hosts later gave Nix the option to clarify his statements. The junior signal-caller didn’t back down from his original statement, saying, “I mean, legitimately, I think you can watch the game and anybody unbiased will think that something is different. It is what it is.”

Below is the full segment regarding Nix’s comments:

Say this for Nix: He certainly isn’t afraid to mix things up, especially during rivalry week. That said, he neglected to mention that Auburn has benefited from several questionable calls over the last year, including two in 2021. The first came against Arkansas in 2020, when officials claimed Nix spiked the ball, despite it going backward. That allowed the Tigers to kick a game-winning field goal as time expired against the Razorbacks, which prompted clarification from the SEC.

Auburn has also benefited from calls this year. The first came at then-No. 10 Penn State, when officials mistakenly removed a down and forced the Nittany Lions to punt on third down. Penn State ultimately won 28-20. Officials calling the Georgia State game also determined an Auburn receiver made a catch, despite the fact it hit the turf. That allowed the Tigers an easier field on what was ultimately a game-winning touchdown in a 34-24 win.