AP Preseason Top 25: Alabama opens at No. 1 for sixth time under Nick Saban 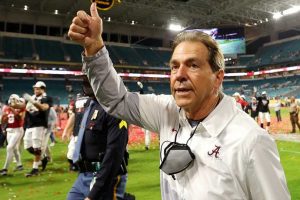 Alabama is ranked No. 1 in the Preseason Top 25 AP Poll, which was released Monday.

This marks the sixth time the Crimson Tide starts the season at No. 1 since Nick Saban took over as head coach in 2007. Alabama, which won the College Football Playoff championship in 2020, also was ranked No. 1 in the USA Today/Amway Coaches Poll.

The last time Alabama started the season at No. 1 and won the AP national championship was 2017.

Oklahoma opened the season at No. 2 and received six first-place votes. The Sooners are shooting for a seventh straight Big 12 championship.

RELATED: Who wins Heisman (non-QB division)? Which first year coaches gets the most wins?

Clemson opens at No. 3. The Tigers were the Preseason No. 1 each of the last two seasons under Dabo Swinney, and they are in the top five for the sixth consecutive season.

Iowa State opened at No. 7, the highest preseason ranking in program history. Cincinnati, Notre Dame and North Carolina round out the top-10.