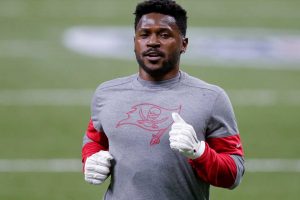 Wide receiver Antonio Brown has agreed to terms with the reigning Super Bowl Champion Buccaneers, a person with knowledge of the situation told USA TODAY Sports on Wednesday. The person requested anonymity because the agreement had not been publicly announced.

Brown's one-year deal is worth $6.25 million with $3.1 million fully guaranteed.

The seven-time Pro Bowler and four-time All-Pro signed with the Buccaneers mid-season last year and produced 45 receptions for 483 yards and four touchdowns in eight 2020 regular-season games and four starts.

Brown recently resolved a civil suit with a former personal trainer who accused him of sexual assault on three separate occasions in 2017 and 2018. Britney Taylor sued Brown in September 2019, shortly after he was released by the Raiders and subsequently signed with the New England Patriots.

FILE – In this Sunday, Jan. 17, 2021 file photo, Tampa Bay Buccaneers wide receiver Antonio Brown warms up before the first half of an NFL divisional round playoff football game between the New Orleans Saints and the Tampa Bay Buccaneers in New Orleans. NFL wide receiver Antonio Brown has settled a civil lawsuit by former trainer Britney Taylor, who accused Brown of sexually assaulting her. Taylor filed the lawsuit in 2019, and lawyers for her and Brown released statements Wednesday, April 21, 2021 revealing the agreement. (AP Photo/Brett Duke, File) (Photo: The Associated Press)

After playing one game in 2019 before being released by the Patriots, Brown was suspended by the NFL under the league's personal conduct policy for the first half of the 2020 regular season following an investigation.

Reconnecting with Tom Brady, Brown signed with the Buccaneers to go on to win Super Bowl 55.

Brown becomes the latest key contributor to re-up with Tampa Bay, which returns all 22 of its starters.