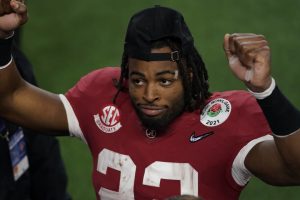 Najee Harris is out to prove he’s worthy of being a first-round pick.

The Alabama running back will work out for scouts at the university’s second pro day on Tuesday, NFL Network Insider Ian Rapoport reported, per a source informed of the plan.

Harris won’t run the 40-yard-dash, however, as he’s been training through an ankle injury suffered late in the season that hasn’t been afforded time to heal, per Rapoport.

A Senior Bowl participant, Harris will work out with teammates today, running routes and doing drills, before taking time to let the injury heal.

Harris didn’t participate in Alabama’s first pro day last week but drove nine hours to support his teammates after his plane trip from Dallas to Birmingham was canceled.

He also proved capable in the pass-game, corralling 80 receptions for 781 yards and 11 TDs, most of that production coming in his final two seasons. His improved pass-catching skills the past several seasons should make Harris more valuable to pro squads.

Harris projects as a capable featured back, can fit any scheme, and should boost the athletic profile of any backfield. NFL Network draft analyst Daniel Jeremiah compared Harris to former Bears Pro Bowl running back Matt Forte, a perennial 1,000-yard rusher in his prime who could win in the passing game.

Harris will hear his name called early in the draft process next month. The question is whether it’s in the first round or early on Day 2.

Elsewhere at the Bama Pro Day, receivers Jaylen Waddle and DeVonta Smith won’t work out, NFL Network’s James Palmer reported. Neither participated in the first pro day. The wideouts are expected to be high first-round selections.

Quarterback Mac Jones will be throwing for the second time. He won’t have his star wideouts once again, but Harris will run routes for the projected first-round signal-caller.

Catch the Alabama pro day at 12 p.m. ET on NFL Network’s Path To The Draft special.