Home » Alabama, Ohio State tie for most players selected with 10; SEC has 65 picks

Alabama, Ohio State tie for most players selected with 10; SEC has 65 picks 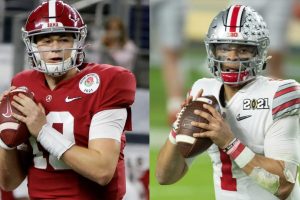 Alabama and Ohio State, in tying for the most players from one school selected in the 2021 NFL Draft with 10 each, fell well short of tying LSU’s record mark of 14 in 2020.

But the Crimson Tide’s crop nevertheless set marks of its own.

With six first-round selections, Alabama tied the 2004 Miami draft class for the most ever.

Alabama also had the most ever selected in the top 50 (eight), with their eighth going No. 38 overall in defensive lineman ﻿Christian Barmore﻿ to the New England Patriots. Other Alabama picks: OL ﻿Landon Dickerson﻿ (Eagles), OL ﻿Deonte Brown﻿ (Panthers) and LS ﻿Thomas Fletcher﻿ (Panthers).

Conference-wide, the Southeastern Conference took its seemingly annual place at the top with 65 selections, followed by the Big Ten Conference with 44.

A look at the top teams and conferences: