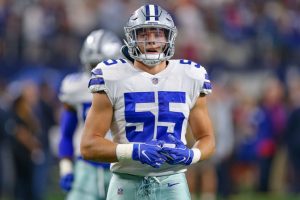 FRISCO, Texas — The Dallas Cowboys will not pick up Leighton Vander Esch’s fifth-year option in 2022, according to his agent, Ron Slavin, which will make the 2018 first-round pick an unrestricted free agent after the upcoming season.

Injury is the biggest reason why. Vander Esch missed 13 games the last two seasons, including a neck injury that required surgery in 2019 and cost him seven games. He missed six games in 2020 because of a broken collarbone. If the Cowboys picked up the option, the $9.1 million would have been fully guaranteed.

Before officially deciding to decline the option, executive vice president Stephen Jones said during draft weekend the team would still like to keep Vander Esch beyond 2021 if they did not add the fifth year, but that will depend on how he plays.

Vander Esch’s best season was as a rookie when he was named to the Pro Bowl after the Cowboys selected him No. 19 overall. He had a franchise rookie record 176 tackles, including 19 against the Philadelphia Eagles. He also had five quarterback pressures, six pass breakups and two interceptions.

Some teams were concerned about his health coming out of Boise State, but the Cowboys took the chance. He suffered an injured neck in an awkward collision with a teammate on a tackle and had surgery to alleviate a nerve issue. In last year’s season opener, however, he suffered a broken collarbone in the first quarter.

The Cowboys have linebacker Jaylon Smith under contract through 2025, but they can get out of his contract from a salary cap perspective without much of an issue. In this year’s draft, the Cowboys selected linebacker Micah Parsons in the first round, but believe his versatility will allow them to use all three players on the field at the same time. In the fourth round, the Cowboys drafted LSU’s Jabril Cox.

Vander Esch is the third first-round pick in which the Cowboys have not picked up the option since the rookie pay system was put in place. Morris Claiborne, the 2012 first-round pick, signed a one-year deal with the Cowboys after the 2015 season, and 2017 first-rounder Taco Charlton was released in 2019.