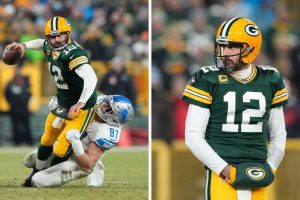 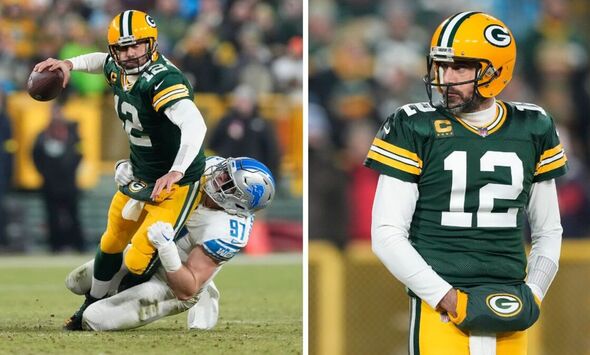 NFL icon Aaron Rodgers has been told he is ‘not going anywhere’ as he continues to shroud his future with uncertainty. The Green Bay Packers quarterback – who signed a monster new contract last offseason – is weighing up his options as he could either return to the franchise, join a new team or retire from the NFL.

In the final round of the regular season, the Packers welcomed the Lions to Lambeau Field knowing that a win over their NFC North rivals would ensure safe passage to the Wild Card round of the NFL playoffs. However, the Lions – who had nothing but pride to play for – overcame Rodgers and the Packers as they claimed a 20-16 victory to eliminate the home side.

Rodgers struggled against Detroit, throwing for 205 yards while also tossing an interception. It meant the 39-year-old finished the season with 12 interceptions – the most he threw in a single campaign since 2008, his first year as a starter – while he also failed to post a single 300-yard passing game for the first time in his career.

After enduring last year’s offseason littered with speculation surrounding his future, Rodgers and the Packers appear set for a similar scenario. Rodgers has been the starting quarterback in Green Bay since succeeding Brett Favre in 2008 and he fuelled retirement speculation with non-committal answers in the post-game press conference after the loss to the Lions.

Rodgers has continued to be cryptic since the end of the Packers’ season, but former NFL star Jason Bell believes he will remain in Green Bay for the foreseeable future. Instead, the former New York Giants cornerback suggested the quarterback is looking to get what he wants from the iconic franchise.

“I think Aaron Rodgers will stay with the Green Bay Packers, especially if he wants to,” Bell said. “He’s got plenty of leverage with the contract situation at Green Bay and I’m not even sure he wants to start over anywhere anyway. Those cryptic messages, in my opinion, are all a bit of a play to get him what he wants, so I don’t think I see him going anywhere.

“He just likes the scare tactics and I think he’s too invested in the franchise and the city to up sticks and change it all, particularly at this stage of his career. I’m not sure he wants to do what Brady has done, so I’d expect him to be in Green Bay come the start of the next campaign.”

After Rodgers claimed his second successive MVP award last season – and fourth of his career – he signed a contract extension which made him the highest paid player in North American sports history on an annual basis. He will earn $50.27 million per year through the 2026 season, when he will be 43 years of age.

Rodgers has failed to deliver a Super Bowl title since the 2010 season despite the Packers’ recent success in the regular season. He has not been able to translate such play to the playoffs, twice crashing out at Lambeau.

Jason Bell was speaking on behalf of 888sport, the official betting partner of the NFL in the U.K. and Ireland