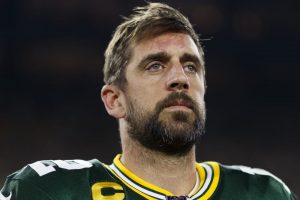 It’s official: ﻿Aaron Rodgers﻿ is holding out of mandatory minicamp.

NFL Network’s Tom Pelissero reported Tuesday morning that Rodgers was not present at the start of the Packers’ 8:30 a.m. team meeting to kick off minicamp, per a source informed of the situation.

The news has been expected for weeks as Rodgers skipped offseason workouts amid his displeasure with the organization.

Missing all three days of mandatory minicamp subjects Rodgers to fines of $93,085. Given that he’s already jeopardized a $500,000 workout bonus by missing OTAs and other workouts, Rodgers isn’t likely to be swayed by the relatively minuscule fines. The wallet-hurting penalties don’t come until training camp, which kicks off July 27.

After skipping all voluntary workouts this spring, Tuesday’s minicamp is the first mandatory workday Rodgers will miss, allowing us to declare him a holdout officially.

With Rodgers absent, ﻿Jordan Love﻿ will get his chance to guide the full offense. The receiving corps, including ﻿Davante Adams﻿, is expected at minicamp, NFL Network Insider Ian Rapoport previously reported. After last offseason was scrapped, it’s Love’s first chance to guide the first-team offense for a lengthy stretch.

Back when Brett Favre famously skipped offseason workouts, the Packers used those opportunities to evaluate Rodgers and prepare for his future at the helm. History is repeating itself, with Rodgers’ holdout allowing Green Bay to better evaluate Love.

With Rodgers officially skipping mandatory minicamp, we’ve passed the first true offseason milepost. The next big date comes in July when training camp kicks off. That’s when we’ll really see whether Rodgers plans to put the organization’s feet to the fire.