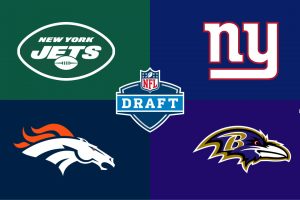 This is a look at the first-round order for the 2022 NFL Draft through Week 18 of the 2021 NFL season, along with the top three needs for each team. The order is determined by record, using strength of schedule as the first tiebreaker (click here to see a full list of the draft-order tiebreakers). Picks 1-18 are set, but the draft order for playoff teams is determined by the results of postseason play.

Arrows indicate how far up or down a team has moved relative to its standing coming out of Week 17.

CG: Davis Mills acquitted himself well as a potential long-term quarterback for the Texans. He didn’t light up the league, but given the talent deficiency around him, his upside remains unrevealed. The Texans might still draft a QB early, but it shouldn’t be assumed.

DP: The Giants head into the offseason loaded with draft capital, including two of the top seven picks. If they focus on the offensive line and pass rush, and hit on those selections, the G-Men could cure what ails them in the trenches in short order.

PICK ACQUIRED FROM THE CHICAGO BEARS

DP: In a passing league, the Falcons can’t get to the quarterback. They have the fewest sacks in the league since the start of the 2019 season and the second-lowest QB pressure rate over that span.

CG: There’s little doubt that a quarterback is on the Broncos’ offseason shopping list. The bigger question is whether or not they invest a first-round pick in one.﻿﻿﻿﻿﻿﻿﻿﻿﻿﻿﻿﻿﻿﻿﻿﻿﻿﻿﻿﻿﻿

PICK ACQUIRED FROM THE SEATTLE SEAHAWKS

DP: Washington shored up its offensive tackle situation by agreeing to a contract extension with Charles Leno Jr. this past week, but the pending free agency of five-time Pro Bowl guard Brandon Scherff still looms large.﻿﻿﻿﻿﻿﻿﻿﻿﻿﻿﻿

CG: After a promising 3-1 start, the Browns’ season devolved into an injury-riddled calamity. The re-set for 2022 will need to center on improving the defense.

PICK ACQUIRED FROM THE MIAMI DOLPHINS

See the playoff teams section of this article for analysis of the Eagles’ and Dolphins’ needs.

PICK ACQUIRED FROM THE INDIANAPOLIS COLTS

CG: WR Mike Williams should be the Chargers’ priority keeper in free agency, but when it comes to the draft, the defensive front is most in need of retooling.

DP: The Saints aren’t usually drafting high enough to land one of the top quarterbacks available, but this year could be different. Then again, Sean Payton might prefer to go with a veteran under center and land the dynamic receiving talent his team lacks in Round 1.

DP: Will the Eagles spend a first-round pick on a wide receiver for the third straight year? No one should rule it out given the need for a big, physical target opposite DeVonta Smith on the outside.

CG: Pittsburgh has ridden the Roethlisberger Train to what is almost certainly its final stop, without a clear answer at quarterback behind him. It appears pickings will be relatively slim in free agency for a veteran option. The club’s last first-round quarterback — Roethlisberger himself — worked out swimmingly. But it’s time for another.

CG: Safety tops the club’s needs list as we enter the postseason. The good news: Vonn Bell has had a strong year and is under contract through next season. Jessie Bates, however, is a pending free agent.

CG: The Patriots’ defense could be gutted from linebacker to the secondary by free agency. Unless the club manages to retain some key names — CB J.C. Jackson and LB Ja’Whaun Bentley among them — their draft needs will be fairly clear.

CG: Some serious offensive line talent could be available in free agency, and the Dolphins will have a pile of money to spend in March. A big-splash signing or two in that area could free up a lot of draft flexibility for Miami.

NOTE: See the bottom of this article for analysis of the 49ers’ needs.

CG: The Raiders’ offensive line has been a mess this season. Rookie Alex Leatherwood struggled at both tackle and guard, but the problems went beyond the 2021 first-round pick.

CG: The Bills’ draft needs project up front on both lines, but the wide receiver position can’t be neglected, especially if Emmanuel Sanders moves on. Dawson Knox’s emergence at tight end helps, but not to the exclusion of an upgrade to pair with Stefon Diggs.

DP: Arizona could end up navigating free-agent departures at each of the positions above, but potential losses at running back, tight end and wide receiver also should not be overlooked.

CG: Pass rusher Harold Landry and center Ben Jones will almost certainly be the Titans’ two highest retention priorities among their free agents. If those two walk, the club’s draft needs will endure a shakeup.

DP: Linebacker could rise up the needs list depending on how the Cowboys want to utilize Micah Parsons in 2022 (LBs Leighton Vander Esch and Keanu Neal are pending free agents). The biggest hole to fill might be at safety, though. The contracts are expiring for the three players who played the most snaps at the position for Dallas this season.

CG: Bringing Orlando Brown back at left tackle has to be a huge free-agency priority for the Chiefs, and if they can’t, protecting Patrick Mahomes will be a much bigger draft consideration.

DP: There are far too many potential free-agent losses to know exactly how the Bucs’ draft needs will line up come April, but there will be a major void in Tom Brady’s protection if C Ryan Jensen and RG Alex Cappa — who have started in every regular-season game Brady has played as a Buc — are not re-signed.

DP: The needs in Green Bay will largely be dictated by the players the Packers end up cutting to create salary-cap space and the pending free agents from their own roster that they’re able to retain. This is not a squad with glaring holes to fill right now.

TEAMS CURRENTLY WITHOUT A FIRST-ROUND PICK

DP: The Bears won’t have a lot of draft capital to work with, but they have to make a plan to set Justin Fields up for success in Year 2. That starts with finding a left tackle.

CG: The Colts’ cap space ($53.4 million, per Over the Cap) should afford them a good chance to re-sign some key free agents, but there are quite a few of them. Potential holes on the offensive line and a need for receiving targets for QB Carson Wentz could well be Indianapolis’ focus when the draft arrives.

DP: The Rams have one of the better offensive lines in the league. It’s going to take some shrewd drafting to keep it that way, though. All five starters up front are due to hit free agency either this offseason or next.

DP: Cornerback is by far the biggest need for the 49ers, but they could certainly use another wide receiver to join Deebo Samuel, Brandon Aiyuk and Sunday standout Jauan Jennings.

DP: The secondary is among the positions that could be headed for an overhaul with Seattle’s top two corners and top coverage safety ticketed for free agency.