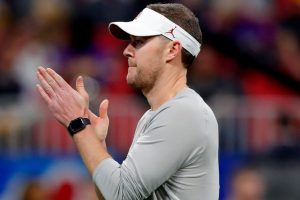 College football prospects and coaches are finally reunited as the recruiting dead period, which had stretched out for over a year, was finally lifted at the start of June.

As a result, this month is poised to be an active one, with official visits and camps once again allowed. In turn, the rankings could quickly and more frequently be shaken up.

At this time, Ohio State continues to lead the pack, but narrowly with Georgia and LSU right on the Buckeyes’ heels, and that race for the top class is shaping up to be a tightly contested and potentially volatile one.

Rutgers, which has not had a class finish higher than 47th in the past five cycles, heads into this busy month with a top-10 class. Doing a better job of keeping in-state talent at home will be a key for head coach Greg Schiano, and he recently scored a big win within the state’s borders by landing ESPN 300 OT Jacob Allen, the No. 3-ranked prospect in New Jersey.

Alabama, which signed the top-rated class for 2021, sits outside the top 10 with a class that lacks quantity but is strong in quality. In addition to Ty Simpson, the No. 2-ranked QB, the Crimson Tide have also landed verbals from Emmanuel Henderson and Le’veon Moss, the No. 1- and No. 3-ranked running backs, respectively.

Kentucky had a huge spring on the recruiting trail and rocketed into the top 25. Mark Stoops and his staff secured some big wins close to home, landing top-10 OT Kiyaunta Goodwin out of Indiana, versatile ESPN 300 twin brothers Keaten and Destin Wade out of Tennessee and an in-state pickup in four-star athlete Treyveon Longmire.

Missouri was another class on the rise thanks to key additions close to home, led by the state’s top-rated player, ESPN 300 DT Marquis Gracial.