2021 NFL trade grades: Who's winning/losing on the deal-making front? 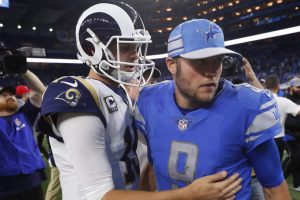 The free agency frenzy has certainly shaken up rosters across the NFL, but that’s not the only avenue for offseason change. The new league year has also provided a number of trades, big and small. Here’s my report card on the most notable deals thus far:

The Rams are bold. Arguably reckless.

I give them credit for heat-seeking an upgrade under center. Les Snead could have spent the offseason unfurling complimentary couplets about the team’s belief in Jared Goff﻿. Instead, the daring general manager mortgaged the future for a quarterback in Matthew Stafford who looms as a potential final piece of the puzzle.

Los Angeles certainly hopes so, as additional pieces will be tough to unearth with the Rams now minus a first-round pick until 2024.

This high-risk/high-reward lever pull comes packed with a volatile array of potential outcomes. Grading the swap today is a fool’s game, but I don’t mind calling it a win for both sides.

Coach Sean McVay’s relationship with Goff went from glowing, to guarded, to grizzly. Too many hyper-killer interceptions from the QB, not enough personal growth under center when McVay wasn’t mouthing sweet nothings into the headset. Goff devolved. Proponents can point to his wonderful 2018 regular season, while doubters counter with his thousand-yard-stare implosion against the Patriots in Super Bowl LIII. Too hot-and-cold ever since with too many mind-numbing mistakes. This past season saw Goff utterly neutralized in a rash of games that reduced Los Angeles sports talk radio to a blood sport.

Blame Snead for pulling the trigger too quickly on a four-year, $134-million contract extension in 2019, but I reward points for acting decisively this offseason when it became clear Goff’s ceiling was iffy. That payout forced the Rams to offer more for Stafford than competing suitors — such as the Bears, Broncos, Panthers and Patriots — could stomach.

This deal hinged on moving the outrageous $106.6M remaining on Goff’s deal — with $43 million in guarantees — although the Rams are still scheduled to eat $22.2 million in dead-cap moolah. The Lions are simply housing Goff as part of a full-force rebuild. Who knew more about McVay’s desire to improve the quarterback position than newly minted Detroit general manager Brad Holmes, who spent years in Los Angeles and used that secret knowledge to solve a problem for both clubs?

It tangibly alters the Rams, who find themselves as a bona fide Super Bowl contender if Stafford arrives as advertised. On paper, Los Angeles can expect spectacular play from the veteran, giving McVay a dance partner he can tango with versus simply coach up.

It boils down to what kind of team the Rams choose to be. You can float through life as the Chicago Bears, printing season tickets boasting Khalil Mack﻿’s image while hiding the reality that Andy Dalton is your latest mezzanine-level starter; going 8-8 until the end of days in a league that passed you by. Or the Rams can do things their way, shrugging off the NFL’s obsession over first-round picks for a signal-caller of beauty.

If Stafford takes Los Angeles to the threshold, nobody will care about the cost. The trade will appear in future years as a golden bargain. If the Rams fail to win a Super Bowl, they’re still a better watch with Stafford under center than a devolving Goff whipping picks into the godless wind.

Carson Wentz has slipped into an elusive, perilous category: The quarterback people think they can fix.

It’s eye-of-the-beholder stuff to the max. You can fire up tape of his pre-injury heroics in 2017 and make a case for an MVP-level body of work. You can explain away large chunks of the past two seasons as Philly’s fault: A young arm struggling behind a broken-down line inside an “attack” devoid of reliable weapons.

Less-charitable types might single out Wentz as a player who simply lost his grip over the role. Walking into sacks. His numbers tumbling in extraordinary fashion amid whispers he doesn’t jive with elements of the locker room. He spent most of last season airmailing forced lobs into warzones. Trying — out of some higher desire, perhaps — to save the day, but too often creating turmoil in key seconds.

His mysterious play begs pressing questions: Who is Carson Wentz? Was there a body-switch at some point? Can he be fixed?

In theory, no better landing spot exists than Indy. Coach Frank Reich was the chef who cooked up magic with Carson during that spectacular 2017 campaign. Reich Truthers believe the quest collapsed in Philly the minute the coach left for the Colts. Can it be that simple?

A vastly superior offensive line will help Wentz, especially if Indy finds a capable replacement for retired left tackle Anthony Castonzo﻿. Jonathan Taylor, Marlon Mack and Nyheim Hines form a pummeling, versatile backfield. The wideouts are young and promising, while the defense is among the best in the AFC.

The Eagles were in a tough spot. Bad energy and a furious fan base made it nearly impossible to cling to Wentz, but they aren’t entirely rid of him yet: A whopping $33.8 million in dead money lands like a Death Star kill-shot on an unsuspecting burgh.

This trade is a bargain for the Colts if Wentz regains his form of old. If not, Indy wishcasting Carson as a franchise starter could turn next season into a horror reel.

Do I trust the Patriots to milk the most out of a high-upside tackle who helped them win a Super Bowl three seasons ago?

Las Vegas essentially gave away a player who remains one of the league’s finest tackles when healthy. Maybe the Raiders tired of him after a messy 2020 performance mired by COVID-19 drama. Maybe they know something we don’t and blanched at the concept of paying him $29 million over the next two seasons. Moving on is their prerogative, but given what we know, only microdosing drifters would argue the Silver and Black won this swap.

Another money move for the cap-tight Rams, who asked Brockers to restructure his $9.83 million price tag for 2021. The beefy defensive tackle resisted their advances and now finds himself in Detroit — with a new three-year, $24 million deal, to boot.

The juiciest part of this transaction is the highly awkward scenario Brockers must endure inside the Lions locker room.

After the Rams traded away Goff for Stafford, the defender happily told TMZ: “Is it a level up? In my heart, deeply, just understanding what (Matt) brings, it’s a level up.”

Brockers was then shipped to Detroit and forced to offer a private and public apology to Goff while telling TMZ: “I was just trying to give PR some help.”

The best help comes in September, when Brockers will be asked to fortify a paper-thin Lions defense angling to keep Goff out of shootouts he isn’t capable of winning with a starting cast of wideouts currently headlined by Breshad Perriman﻿, Tyrell Williams and Geronimo Allison﻿.

This one captured the imagination of Media Heads. Initial reports suggested the Raiders flat out released Hudson at his request, happily taking on $15.6 million in dead money through 2022. Las Vegas brass then grew wise and shopped the pivot to Arizona for a third. Chalk it up as a strong addition for Kliff Kingsbury’s offense, swapping out struggle-bus blocker Mason Cole for Pro Football Focus’ No. 8 center in 2020. Turning 32 this summer, Hudson has allowed just three sacks since 2015 and gives Kyler Murray a rock to lean on up front. The Raiders countered by extending young backup Andre James, but let’s not miss the boat here: Hudson wanted out of town and far away from a team-building process taking its sweet time to build a bully.

﻿Seattle’s eternal quest to build a powerful (functional?) line in front of Russell Wilson was aided by this trade. Yet another jettisoned Raiders blocker, the 29-year-old Jackson finished 2020 as the 40th-ranked player at his position, per Pro Football Focus. Last season marked the fifth campaign in seven years where Jackson allowed one or fewer sacks and two or fewer quarterback hits. He’s a reliable guard with upside who immediately fills a starting role after Mike Iupati hung up the cleats. It might not be enough to fully appease Wilson, but it’s a start.

﻿A former Pro Bowler, McKinney wanted out of Houston and got his wish. He missed all but four games a year ago due to a shoulder surgery, but looms as a plug-and-play starter for Miami beside Jerome Baker at inside linebacker. Houston dumps his $28.5 million salary through 2023 in exchange for Lawson, an enticing first-round athlete yet to fully realize his promise. The Dolphins have landed a proven asset; the Texans are hoping Lawson’s best stuff is still to come.

Urban Meyer’s Jaguars desired to grow thicker along their defensive front. Mission accomplished after swapping for Brown and handing him $11 million over two years with $7.6 million guaranteed. The cash suggests he’s projected to start or at least share that role with veteran Tyson Alualu﻿.

The Jaguars have a pair of promising second-year linemen in Doug Costin and DaVon Hamilton﻿, but Meyer gave away little to add a reliable presence who can snuff out the run. Jacksonville’s free-agent haul has generated fair suspicion, but few teams struggled more against backs in 2020. Why not throw some of Shad Khan’s money at the problem?

﻿﻿A wretched mess. Three days after officially acquiring the flat-lining first-rounder, Miami released Wilson to the wind. It didn’t take the Dolphins long to realize what Tennessee learned through his painfully ponderous rookie campaign: Wilson doesn’t appear enamored with the concept of a career in the National Football League. I’m giving the Titans a “D” because they score no points for completely botching last year’s chance at a first-round talent.

﻿﻿A cancer survivor, Cannon overcame an early career littered with injuries to start 28 games between 2018 and ’19 for New England. An opt-out in 2020, he arrives in Houston as a solid pass blocker comfortable at right tackle. It’s unclear which passer he’ll be blocking for, but consider this a friendly swap between Bill Belichick and former Patriots aide Nick Caserio, now scrambling to piece together a passable roster. Swapping selections in the fourth, fifth, and sixth rounds amounts to a cunning maneuver for New England.

﻿Baltimore looms as a suspicious landing spot for wideouts, but not for tight ends. Oliver is a figure of intrigue, an athletic 6-foot-5, 249-pound pass catcher yet to emerge due to a pair of injuries — a broken back and fractured foot — that have kept him out of all but four games since being drafted in the third round in 2019. NFL.com’s Lance Zierlein compared him to Vance McDonald. The Ravens are hoping for that and more, but consider this an experiment by a franchise happy to unleash multiple tight ends in Greg Roman’s old-world attack.

Is it me, or was Lee Smith on the Bills for 19 seasons? Fact-check: It was actually six, with another four in Oakland. For his troubles — 64 receptions over the past decade — he’s been airmailed to Atlanta. A classic run-blocking tight end forged in the fires of old, Smith will do his thing while the Falcons leave flashier moments to Hayden Hurst﻿.